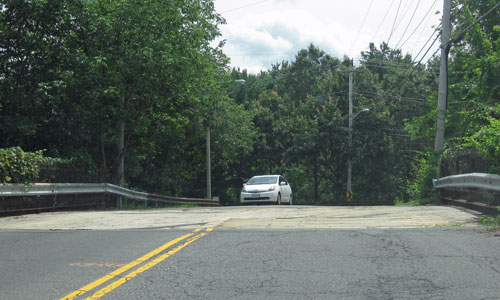 The wooden planks on the bridge that crosses the railroad tracks at Northboro Road (map) are popping up. And that’s not a good thing.

Town Engineer John Woodsmall tells me the bridge is owned and maintained by the Mass Highway Department. Occasionally the planks that make up the bridge deck pop up and have to be nailed back down. Problem is, the planks are popping up more and more frequently, and the beams the planks are nailed into aren’t holding the nails anymore.

The last time the bridge was formally inspected by Mass Highway was in October 2007 at which point it was given a rating of ‘fair’.

Mass Highway told Woodsmall more permanent repairs may need to be made to the bridge deck and timber supports. Some surveyors were recently out at the bridge collecting data that will be used to develop a longer-term repair strategy. Mass Highway says the bridge will not be replaced due to lack of funds.

No word yet on exactly what the repairs will entail, when they’ll be done, or what impact they’ll have on use of the bridge.