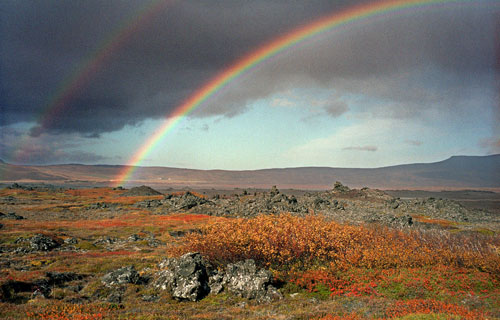 If you’re stopping by Red Barn to pick up a nice iced coffee this summer, be sure to take a few minutes to look at the walls. There you’ll find a collection of photographs by Southborough resident William Short.

The subject of the photographs is the landscape of Iceland. Short has a passion for Viking-age Iceland, and travels to the country regularly to visit friends, lecture, and do research. Here’s how Short says he became interested in Iceland and their Viking past:

I discovered the sagas written by Icelanders in the medieval era, and became fascinated by both the stories, and the history of Iceland.

About ten years ago, I became involved with the Higgins Armory Museum in Worcester, which was just starting up a group (which eventually became known as the Higgins Armory Sword Guild) to research, practice, demonstrate, and teach the martial arts of medieval Europe. Because of my interest in the sagas, my focus has been on the combat techniques of Vikings. I demonstrate at the museum (as well as other museums and universities) on a regular basis.

A couple of years ago, I left a position at Bose Corporation to spend full-time on the Viking research and writing and lecturing.

This summer Short published his second book, titled Viking Weapons and Combat Techniques. He has another due out next spring. You can find out more about his book and his interests on his website (www.williamrshort.com).

The photo at the top of this post is one of the ones from the exhibit at Red Barn. Says Short, “It was shot last September over a lava field adjacent to the Hvítá river in west Iceland, at the tail end of a rainstorm. Iceland has a fall foliage season every bit as brilliant was what we have in New England, but all the foliage, and thus all the color, is only a few inches off the ground.”

More of Short’s photos of Iceland can be found in his online gallery.