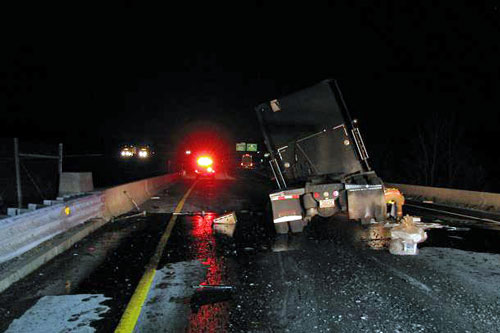 A tractor trailer cab struck a guardrail on Interstate 495 southbound at the Main Street overpass in Southborough shortly after midnight on Thursday, spilling an estimated 115 gallons of diesel fuel.

The crash ruptured one of the two fuel tanks in the cab, and caused a significant leak in the other. The driver, a man from Woonsocket, suffered minor injuries.

When the Southborough Fire Department arrived on the scene they immediately worked to contain the fuel spill. They called in off-duty and on-call personnel to help with the effort.

Ted’s Towing and a private haz-mat company also assisted with the clean up. The Mass Departments of Transportation and Environmental Protection, along with the state police were also on the scene.

The Southborough Fire Department cleared the scene at 3:24 am.

These photos of the wreck were provided by the Southborough Fire Department. Click any thumbnail to enlarge and view as a slideshow.