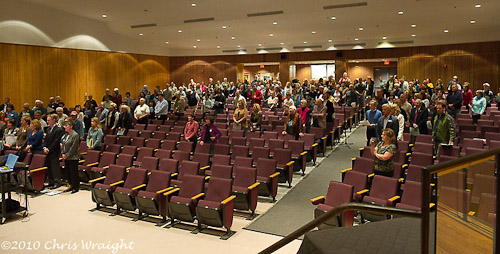 At town meeting this year, I sat near a town meeting virgin. The person has lived in Southborough for many years, but this was his first time attending town meeting. I suspect many of you were in the same boat.

At one point in the middle of some relatively arcane debate, he turned to me and said, “This is crazy. We’re making huge decisions about stuff we know nothing about.” He might have used a different word than stuff.

I have to admit that at certain points town meeting feels like a relic from another time — which of course it is. But the immediacy of the democratic process, the influence we have as voters, is on the other hand thrilling.

I’m sure there are plenty of arguments against it, but I wish Town Meeting was on a Saturday night. Then parents with young children might have a better chance of going. At least either my husband or I could go if it was on a weekend night when neither of us had to work (and wouldn’t have to work the next day, given how late into the night these meetings go). Or we could get a sitter who could stay late b/c she wouldn’t have school the next day.

Or maybe it could be on a Friday and Saturday instead of Monday and Tuesday? Then people like me would have a better chance of going to at least one day, since the meeting almost always goes two days from what I’ve heard?

I had asked the same question at one of the school committe forums leading up to the annual meeting and was told by one of the committee member (might I say very rudely) not to try and change the traditions of Southborough!!!! To date I feel that it was a very inappropriate response to a perfectly valid question from a tax paying resident and a parent.

The Advisory Committee recommended an article in the 2009 ATM to move the meeting to a Saturday (during the day). Many towns do this for the reasons you cited.

It failed by a wide margin.

Al, who did the voting?

I know that change is hard–if we moved it to a Saturday there would have to be a study done to see which Saturday would be best, the previous one or the one after.

Among other things, the recent Town Governance Study Committee recommended that Town Meeting be moved to Saturday morning in order to maximize the opportunity for (i) quickly reaching a quorum, (ii) conducting the Town’s business briskly, and (iii) increasing voter participation generally. As Mr. Hamilton noted, Advisory took up the mantle in 2009 but we have yet to get there.

I would also like to see the ATM moved to a Saturday.

It will draw a far larger, more diverse , and inclusive set of community residents. (Like, for example – working wage earners and heads of families. Remember them?)

Moving to a Saturday ATM will also be provide a far-more balanced safeguard against Looney Tunes decisions and votes that can occur (and have occurred) when left in the hands of those who are still able to warm a seat at 11:00pm on a weeknight. It doesn’t take long to identify recurring problems and shortfalls with true “representation” and the airing of majority Southborough concerns in this type of a “democratic” venue.

If you have ever watched news coverage of a protest, and found yourself wondering what kind of a person actually has the **TIME** to dress as Dick Cheney in Elmer Fudd hunting drag , or parade around an urban esplanade with a sandwich board in 90 degree heat on a weekday afternoon, it doesn’t take a quantum leap to figure out that when an Annual Town Meeting is held into the late evening hours on a **weeknight**, one class /faction of people (often constituting a a bare plurality) – will often be making our decisions.

I have attended Town Meetings for several years and I agree that many of the procedures and processes are archaic and frankly inefficient. We had a good draw for night one and less of a showing on night two. The challenge is that many of the decisions that towns people are requested to make the nights of town meeting have been discussed and presented in several previous forums be it at DPW, Planning, Zoning or Selectmen meetings. Most people, including me, usually attend those specific pre-meetings if there is a burning platform that directly affects them. Awareness of many of the issues is difficult to communicate.

Susan, your introduction of MySouthborough.com has been a fantastic way to get more people involved and raise awareness. Southborough News, Metrowest and the town website provide other venues for communication flow but it is usually the people who are most impacted by one particular issue that help get the word out; like the School funding this year. Many parents were very involved in getting information out and providing critical links to updated information. I was pleased with the number of my peers who opted to show on night one to help vote the budget through.

I am sure most towns are challenged with trying to educate on the warrant articles on the floor. There were plenty of times where I did wonder if our townspeople truly knew what they were voting on. I was also concerned with the expression from the Board of Health that they had not agreed to what was printed in the Warrant- this raises many more questions of clarity of communication and transparency of process.

I do believe that active residents can direct change for Southborough. I have tried to get involved and stay current but it is enormously challenging to work full time in Cambridge, raise two children, and have a strong marriage while staying as current as I need to on all issues. I am sure this is a sentiment that is shared broadly with my peers. I do get passionately involved in the issues that I perceive as important to me and my family- I think this is true for many of us. The question is: is there a way to join forces of the passionately involved to offer a forum for broad and clear communication to our towns people? I am willing to help if there are some good ideas out there.

Two nights a year, sometimes three. Then one more if there’s a Special Town Meeting in the fall, and there usually is. It’s not a huge commitment, and people who are committed will find a way to show up instead of carping from the sidelines. Democracy, especially at this level, takes effort.

The current weekday evening TMs seem pretty representative of the town, though there’s some bias in favor of empty nesters (though I went for many years while my child was still in school) and retirees. Would a curfew of 10:30 instead of 11:00 help balance that?

A weekend TM might be better, though it would clearly take both weekend days unless you’re willing to warm a seat for 8 or 9 straight hours. I suppose you could do both afternoon and evening on Saturday or Sunday. Sounds pretty exhausting. But the bottom line is that, if you want to change how it is, you’ll have to show up to be heard under the current system.

Maybe we should dispense with TMs altogether. They’re traditional, but America outside of New England doesn’t have them. They’re not the only way to run a town. Are they quaint and obsolete?

It’s not a huge effort to get an article on the warrant. Go for it. Get a little help with writing a valid article, get the signatures of ten registered voters, present your petition to the Board of Selectmen, and prepare for the debate at the next TM. It’s your town.

additional recollections as to why weekend days were not as attractive for TM as some would think: many are tied up with their kids sports programs, others use the weekends to get away; others said that the weekends were their only time to get errands done.
I think Mr. Roney hits the nail on the head. It’s two, maybe three nights a year coupled with some effort during the year to stay up on what’s happening. Those who want to be involved figure it out and make the time.
For those new to the process, one item that ‘bit’ me in the first TM’s that I attended was a need to anticipate the Moderator’s request for public comment….. it’s kind of important to know just a bit in advance that you’re going to want to comment on an article and be ready to move to the microphone or sometimes the opportunity just passes you by. Every now and then. TM surprises with the lack of comment on an issue…the new Police Car was an example this year. I suspect a few people assumed there’d be much comment on that one.