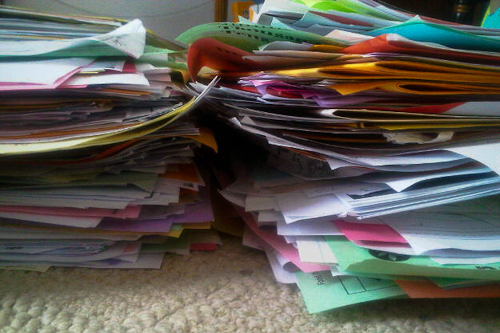 Math worksheets, spelling lists, announcements, letters to parents, sports schedules, concert notices. Have you ever stopped to consider how much paper is sent home with your kids over the course of the school year? One Southborough mom did, and it inspired her to undertake a very interesting year-long project.

Meredith O’Brien, mother of two fifth graders and a third grader, decided to count every piece of paper her kids brought home and dumped on her kitchen counter over the course of the school year. She writes on her blog, Picket Fence Post:

Having spent the first few years of their lives as students feeling absolutely BURIED by paper – and constantly frustrated when teachers would complain that parents forgot stuff – I decided to determine if I’m just woefully disorganized or if it’s nearly impossible to keep on top of all this, no matter how many binders, organizing shelves and systems I attempt to employ to rein it all in.

In the past few years, all four Southborough schools have relied more on electronic means of communication in an attempt to be more green, but O’Brien says her kids were often sent home with paper duplicates of the electronic communications.

You can read more about O’Brien’s fascinating experiment on her blog.

Moms and dads out there, what do you think? Do the schools send home too much paper? How do you keep it all organized?

It would also be helpful to have “progress papers” like coloring sheets, worksheets that do not require any work at home bound into a weekly packet. I love seeing what is going on at school, but the paper does get overwhelming.

I keep a SOS calendar on my refrigerator and write down “to do”s- including when to wear Red Sox shirts, bring contributions to food pantry, etc. For the other papers, I look at them and immediately trash if not something I put in a yearly art book that I make for each grandparent.

I fully support using on-line communications. Rather than PDF files, I would love to see a blog/Q&A feature on the school sites where parents could discuss open issues, volunteer calendars could be posted with open spots and reserved spots, lunch menu posted, etc.

I go through my kids’ paper every night to keep it up. I keep three boxes for each kid: keepsake (cute art and writing worth saving), maybe (wait to file them at the end of the month), and dump (temp place that I sort again every weekend). My kids go through the first two boxes with me at the end of school year. It is amazing to say how much they have progressed. It is fun to sort them too!

I completely agree. There is just too much paperwork. To me the color coded papers does sound like a good idea… but regardless they need to cut down on paper and use emailing as way of communication. Secondly, I am not sure if this is possible, but for all the class work, instead of handling papers around, it would be nice to have a workbook for each subject. And then depending on kids capability, they could hand additional papers in necessary. That way all papers stay well together and you can see the progress of the child as the year goes by!