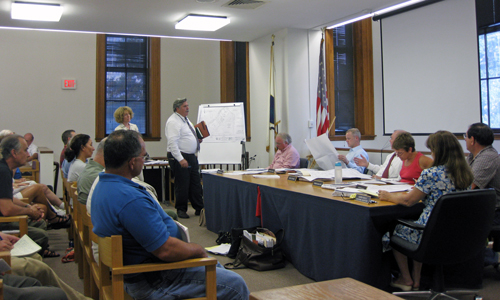 Above: An attorney for the Gulbankian family speaks to the Zoning Board of Appeals

Residents came with a lot to say about the Gulbankian family businesses at last night’s Zoning Board of Appeals meeting, but many of them didn’t get the chance to say anything. ZBA Chairman Sam Stivers told the standing-room-only crowd that they would not discuss the merits of the case at the meeting. Instead they focused on procedure.

Stivers said the purpose of the meeting was to “touch-base” on next steps. “I’m motivated to find a way to get the answer, but I want to make the best decision we can given the competing interests here tonight,” he said.

In the end, only procedural decisions were made, so the question of which and how many businesses can operate on the Gulbankian Farms property on Mt. Vickery Road remains.

The Gulbankian Farms garden shop has been in operation since 1965. In 1983 and again in 1988, Michael Gulbankian sought and received variances to operate a machine shop and a bus terminal on his property.

The variance for the machine shop specified that work would be performed on bus engines, but for many years the Gulbankians have been restoring antique car engines at the shop. A question before the board is whether antique car engines are substantially different from bus engines to require a new variance, or whether the existing variance can be modified.

The Gulbankian family was forced to close the machine shop when Building Inspector Dave Gusmini issued a cease and desist order in June. Town Counsel Aldo Cipriano said the order was effectively rendered moot by a district court decision last week, but he told the board the town has other ways of enforcing the zoning.

“With all due respect to the Gulgankian family, they didn’t come in voluntarily. This came in as a complaint,” Cipriano said. “The town has to maintain enforcement rights or it sets a dangerous precedent.”

“Nobody has been hiding what the Gulbankian’s have been doing,” an attorney for the family said.

Also at issue is the proposed bus terminal. An attorney for the Gulbankian family said Gusmini and Cipriano have stated that the bus terminal is allowed under the current variances, but Stivers said there’s still more to work out.

“There are some things we need to consider to protect the interests of neighbors,” Stivers said. Neighbors have expressed concern about noise, pollution, and drainage issues.

Throughout the discussion, emotions ran high, with residents speaking both for and against the Gulbankian businesses. Others expressed frustration about the drawn-out process.

“You may or may not like what’s before this board,” board member Regina McAullife said. “The people on this board have rules that we live by. I hope when you go home that tonight it isn’t an us versus them thing. We’re trying to do what’s right.”

The board voted unanimously to continue the hearing to August 25.