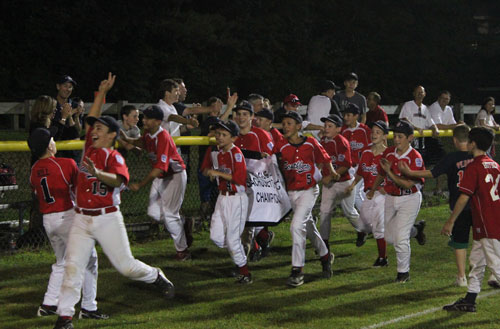 The tournament runs through Sunday and features round robin play. Southborough will face off against Leominster tonight at Kelley Field in Norwood. On Friday, they’ll take on Peabody Western, followed by Newton West on Saturday.

The two teams with the best records will play for the state championship title on Sunday. The winner will advance to the New England Regional Tournament in Bristol, Connecticut starting August 6.

In their sectional win on Tuesday, the Southborough 12-year-olds beat out Braintree by a score of 5-2 at Dean Park in Shrewsbury. In the game, a third inning solo home run by Nolan Kessinger gave Southborough a 1-0 advantage. Braintree grabbed a two run lead in their half of the third, but Southborough responded in the fourth with a two runs off a single by Connor Henderson. Jack Harlan hit a two-run homer in the sixth.

Matt Trehub pitched a complete game with five hits, 10 strikeouts, and no walks to earn the win for Southborough.

Tonight’s game against Leominster starts at 7:45 pm. Kelley Field is located behind Coakley Middle School at 1315 Washington Street in Norwood. Go show them some support!