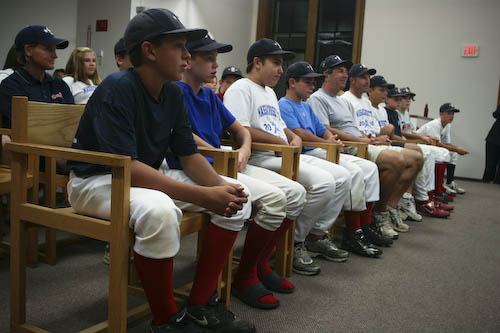 Their sights may be set on Bristol, CT, but the Southboro Little League team got a moment on Tuesday night to reflect on what they’ve already accomplished.

“What you’ve done, you probably don’t realize just yet how significant it is,” Selectman John Rooney told the team of 12-year-olds who were invited to attend last night’s Board meeting. “We’re a town of 9,000 and you’ve defeated towns ten times your size. Over 300 teams and only one remains at the top of Massachusetts and that’s you.”

Parents, coaches, and residents clapped as the Selectmen awarded each boy a certificate.

“I want to say thanks for the support of the town. It’s been tremendous,” Coach Ken Trehub told selectmen. “Every single person in the ballpark in Norwood on Sunday with the exception of the families of Peabody players was rooting for Southborough. The reason for that is these kids handled themselves with a maturity and class far beyond their years.”

Selectwoman Bonnie Phaneuf also congratulated the boys and recognized their team effort. “You’re lucky to have each other,” she said.

“You should be very proud of yourselves,” Selectman Bill Boland told the team.

The team’s first game in the Little League Eastern Region Tournament is on Friday at 2:00 pm.