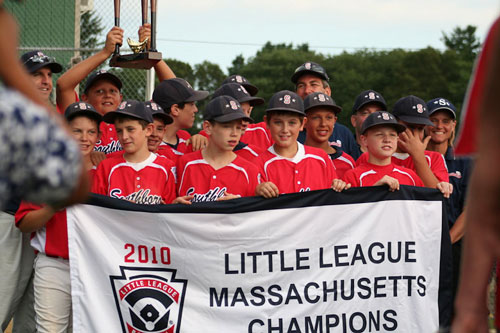 Above: After their state win, Southboro is moving on to regionals (contributed photo)

The Eastern Regional Little League Tournament kicks off today, with the boys from Southborough representing Massachusetts. Here’s a schedule of our team’s games.

* To be televised on NESN

The championship game between the top two New England teams will be played on Saturday, August 14. You can be sure I’ll post the game results as soon as I get them.

To all of the players, coaches and their families~
Congratulations to all of you!! To the players, I am so very proud of you! What an accomplishment!! You have shown what hard work and great sportsmanship can result in! To the coaches and families, you have taught these boys well!! They obviously respect you, each other and the game of baseball, and that is a direct reflection on all of you! My family and I will be watching and cheering for you as your journey continues. And I know I speak for the entire staff at the Woodward School where I work in saying Good Luck!! We are all cheering for you!!

My best to all!!
Kerry Hill

To the players and families of the Massachusetts Little League Champions!
I echo Kerry Hill’s cheers and congratulations! It was SO exciting to hear the Southborough Team will be representing Massachusetts. They are a fine group of kids and we’re all so proud of them. I wish there were a radio broadcast to listen to the play-by-play today, but you can be sure I will be glued to the TV to see the NESN games!

I will be in Vermont on Sunday-Very near Shelburne- Routing for Southborough!!
Best of luck to you!!
It’s all very exciting for you and your families-enjoy every minute of it.