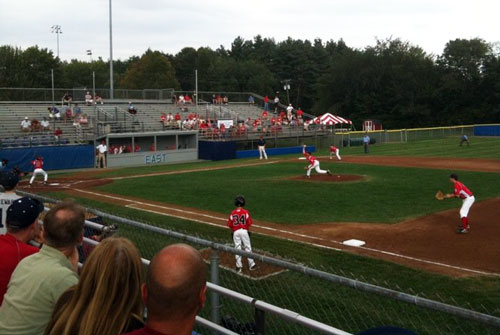 Above: Southboro on the field today in Bristol, CT (photo from Facebook)

The bus-load of fans who traveled down from Southborough this afternoon to see our Little League team face off against Shelburne, VT, got a good show. Southboro won the game by a score of 6-3.

Nolan Kessinger and Connor Henderson led off the bottom of the first inning with solo home runs while Southboro starter Matt Trehub struck out 10 in four innings. (via Worcester Telegram & Gazette)

This was the second game of round-robin play. Southboro fell to Bangor, ME on Friday, so their win today gives them a record of 1-1. The four teams with the best records will advance to the semi-finals on Thursday.

Southboro next faces Cumberland, RI on Tuesday at 1:00 pm, followed by Fairfield, CT at 1:00 pm on Wednesday. Both games will be televised on NESN.