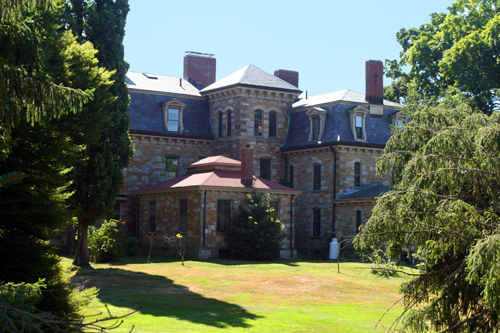 If you’re anything like me, you’re intensely curious about the fate of the Garfield House — the historic stone mansion on Main Street between Parkerville and Deerfoot Roads that was scheduled to be auctioned off tomorrow. Turns out we’ll all have to wait a bit longer to find out who the new owner will be.

According to the Oak Realty website, tomorrow’s auction has been postponed (thanks to reader sue socal for the tip). The website doesn’t give a new date, but the MLS listing says the property will go up for auction sometime in late September or early October.

The 10,000-plus square foot home was originally built in 1849 by Southborough benefactor Joseph Burnett and later purchased by descendants of President James Garfield. It was last assessed by the town in 2009 at nearly $1.7M. In addition to the house, there are two already approved residential lots on the four-acre property.

Update 2:25 pm: Steven H. Greenberg, the realtor in charge of the sale, just emailed to explain the delay:

We are waiting on a septic installation and other engineering. It was decided it was better to complete the above prior to the sale.

Greenberg said additional open house dates will be added once the auction is rescheduled.

YAY!! Now I can go see the house!! I wan’t able to make the other viewings. There’s just something about that house is calling for me to see it.

I have always loved and admired that house from afar. Mrs. Garfield used to sit out from time to time, in her wheelchair, and wave as cars drove past. One day, my daughter Monica and I pulled over, parked, and went to speak with her and (I assume) her son. What a lovely woman. She told us all about the house. She seemed tickled when we told her how we admired it. Truly the most magnificent house in Southborough.