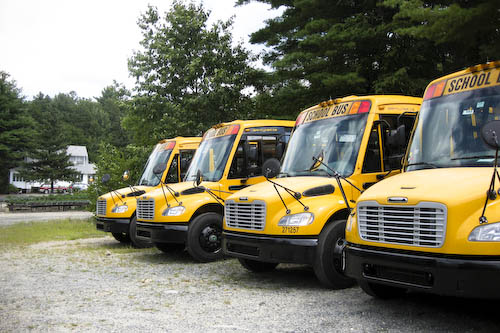 Above: School buses parked at Gulbankian’s

The Gulbankian family will go before the Zoning Board of Appeals once again on Wednesday night. When they were in front of the board late last month, a capacity crowd turned out to argue both for and against the family’s businesses.

At issue is how many businesses the family can legally operate on their Mt. Vickery Road property, and under what conditions they can operate. While the town’s bylaw says only one business can operate on a given property, the family says they have variances dating back to the 1980’s to allow three businesses — a garden center, a machine shop, and a school bus terminal.

Building Inspector Dave Gusmini disagrees, and earlier this summer ordered a cease and desist order against the garden center and machine shop. That order was recently overturned by the ZBA.

In particular, neighbors have expressed concern about the school bus terminal which they argue will produce excess noise and pollution. Gusmini has said the bus terminal is permitted under the current zoning, but the ZBA said last month that some consideration needs to be given to neighbors.

At their meeting in July, the ZBA discussed the process for coming to a resolution on the zoning issues, and worked out some of the procedural details. It’s not clear if they intent to make a final decision at this week’s meeting. The meeting starts at 7:00 pm on Wednesday in the Hearing Room on the second floor of the Town House.

The Gulbankians are suffering from a problem that is primarily caused by the Town’s own prior lax attitude and its sudden conversion to a strict approach.

The building inspector is still new, probably about a year on the job as I recall. Shortly after he started, he came to Advisory Committee looking for money from Reserve Fund because, he said, the old budget was inadequate to do a proper job of enforcement. He said he could tell that the Town had never done a proper job of enforcement. He said he was going to change that. He said the Selectmen were completely supportive of taking a new strict approach and that it would pay for itself in the long run. Advisory approved the boost in funds.

With this change the Town quickly transitioned from decades of admitted lax enforcement, the system of law under which the Gulbankians had been living, to strict enforcement, in which a bus engine and a car engine became too different to be tolerated under the same old roof.

Members of the ZBA stated clearly at an earlier meeting that everyone knew for decades that car engines were being repaired in the garage. Probably the prior inspector knew about the different kinds of engines being worked on, and thought it wasn’t worth bothering about. The magnitude and abruptness of the change, from knowledge and toleration of a situation for decades to cease and desist orders and $100/day fines, is unfair, and is the Town’s own fault, (though not the fault of the ZBA.)

An essential concept is that we be a government of laws. This means that a new hire by the Town shouldn’t result a huge change. This is the root reason why this is unfair to the Gulbankians. The actual practice, over decades, reasonably becomes the law in the eyes of the citizens.

I wouldn’t be at all surprised if the judge who threw out the whole stack of Town fines in favor of the Gulbankians caught a whiff of this injustice before handing the Town its goose egg judgment.

At one meeting Town Counsel made much of the fact that the Gulbankians did not come forward to disclose that car engines were being worked on, that instead there was a complaint that triggered the Town’s action. This difference would be important only if enforcement had a history of consistency. In this case however, it is pretty clear that, at any time in the prior 25 years or more, complaining citizens would have been told “the Gulbankians have permits” for what they do. The Gulbankians knew how the Town actually operated, that given there was a permit for a machine shop to repair engines the Town didn’t care much about what kind of engine it was, and were compliant with the Town’s actual practice. There was no reason for them to self-report a problem.

If we as a Town were too lax, and we may have been, a sensible approach would have been to recognize a need to transition. This means that longstanding practices in grey areas need continued flexibility. You don’t slap old businesses with $100/day fines. at least not when the apparent discrepancy is whether the engine being repaired came out of a antique car or a bus. If it is an important point of compliance, and I’m not convinced this one is, then find some way to work with the business while the topic is under consideration.

The ZBA should dispose of this matter in favor of the Gulbankians in the name of simple justice. It ought to face the fact that the Town’s own past practice established the real rules. The sudden action against the Gulbankians is inconsistent with the kind of civility we need to show to one another, particularly to such longstanding law abiding citizens.