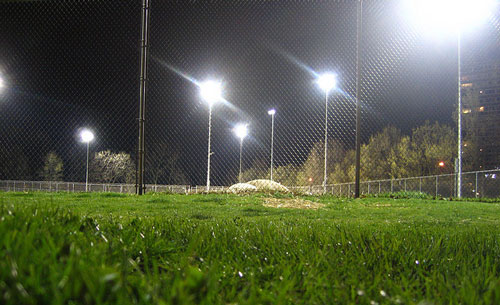 Baseball was big in Southborough this summer, and the Metrowest Daily News reports some parents want to capitalize on the town’s excitement over the sport.

“Lights at the ball field,” (parent John Warfield) said as parents greeted players at the George Mooney Field parking lot the morning of Aug. 5. “It could happen, and then Southborough would have a shot at hosting those types of tournaments.”

It’s not the first time a parent has proposed outfitting the ball fields with lights. Selectman John Rooney said the idea was something he had pursued when his son was in Little League a few years ago, but he discovered there were many barriers, from cost — estimated at $50K to $75K — to the impact on neighbors.

What do you think? Would lights at Mooney Field be a good thing? Share your thoughts in the comments.