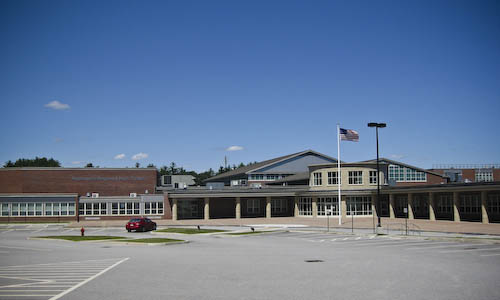 I wasn’t able to attend the Regional School Committee meeting last night, but the Metrowest Daily News reports the audience broke out into applause when the committee voted to name parts of the high school after three notable Algonquin figures.

It’s been a long haul for Wrenn supporters, many of whom have been lobbying to name a part of the school after the much-loved teacher since his death.

“It’s fitting, and I’m happy with the result,” parent Ken Cole told the Metrowest Daily News. Cole and other parents attended the meeting in support of Wrenn’s nomination.

Despite the public support for all three nominees, two committee members abstained from the vote citing concerns about the process.

You can read more in this article by the Metrowest Daily News, and this one by TheDailyNorthborough.com.

I find it odd that the baseball field will be named after a person who never attended the high school. I appreciate that Mark Fydrich was a long Northboro resident and a great guy. Heck, he helped cook breakfast some Saturday’s at the family diner on Rt 20. Still, the field should be named for someone who had a positive impact on the kids at the school or who would be a role model for them. Mr. Wrenn certainly fit that model. I did not know the late spanish teacher.

Thank you to the regional school committee members and superintendent for investing so much time and effort on so many issues, big and small, that enrich our kids’ lives.

Excuse me, but you are WRONG…. Mark Fydrich DID attend Algonquin and played Baseball at Algonquin. He might not have attended all four years at Algonquin, but he most certainly DID attend the school and was known and loved by EVERYBODY he who knew him. This coming from a graduate of the class of 1976. Right from Wikipedia – 1976 Rookie of the Year – The son of an assistant school principal, Fidrych played baseball at Algonquin Regional High School in Northborough, Massachusetts, and at Worcester Academy, a day and boarding school in central Massachusetts.

I apologize for my error. I did not live here when Mark was a high school player. I wrote my comments after reading the news article that said he did not attend ARHS.

I only knew Mark from old memories watching him “talk” to the ball while he was on the mound and seeing him flip pancakes at the diner.

Thanks for correcting me.

I’m with Pam. The Bird was in Sports Lit with me as well as former Police Chief Bill Baker.