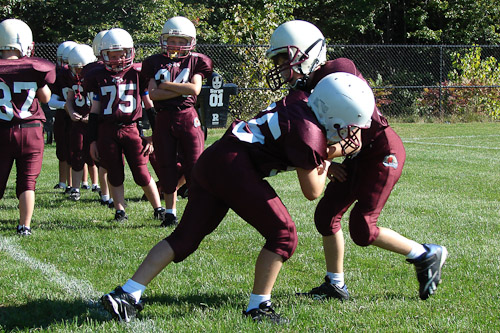 When the Northboro-Southborough T-Hawks made the decision to split from Pop Warner last month, things got a bit ugly. The two organizations reached a settlement late last week on how to split $90K in assets and $30K in equipment, with both saying they’ll run football and cheer leagues in Northborough and Southborough next year.

Terms of the settlement weren’t disclosed, but the T-Hawks reportedly didn’t make out as well as Pop Warner. Still, they’re charging ahead planning their upcoming season. The organization, now part of the Central Mass. American Youth Football League, has rebranded itself  Northborough/Southborough Youth Football & Cheer (NSYF&C).

“We are all very excited about the changes we have before us,” NSYF&C board members wrote in a message to parents. “As a group, the Board and other volunteers have been working diligently since the close of last season to ensure that our program continues on a successful path.”

NSYF&C said they’re looking for volunteers to help plan the 2011 season. In particular, they’re in immediate need of a vice president of cheering to sit on the executive board.

The group will hold a board meeting on Wednesday, March 2 at 6:00 pm at the Northborough Town Hall. Anyone interested in helping out is invited to attend. For more information, contact NSYF&C at nsbod@jrthawks.com.

Amazing, Southboro and Norhtboro can’t even support one football team per age group and now we are going to argue and have two leagues. What a joke. . Mommies and daddys who wont stand up to mommy wont let their little boys play a real mans sport in Southboro – they may get hurt, oh my. My son had to travel to another town to play because the rotten Pop Warner femenized policies only allow boys in to weigh so much at age levels (truthfully, so gilrs can play). So if you have a tall and big (boy) kid he gets cut out of playing and my son did at 10 and 13 by the NS Pop Warner Football League rules. So the great leveling field for all men, Football, could not put a big guy on the field. So i say blow off Pop Warner, that argument is over money. The best all around football for kids is the American Football Leage by far (I am dissapointed it took so long because my son missed two years of play). All the older champs, real football players, and college bound football players are matriculationg from the American Football league and those towns formally in Pop Warner across the country are leaving in droves to the American Football League.