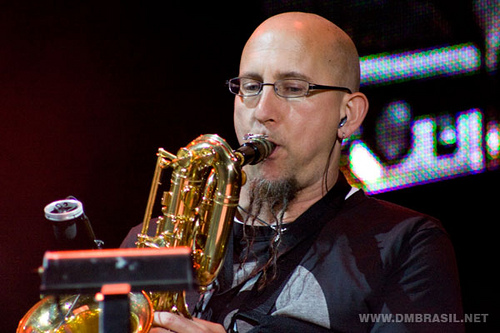 What a day it’s going to be for Southborough and Northborough music students! Three-time Grammy Award winner Jeff Coffin — a member of both Bela Fleck & the Flecktones and the Dave Matthews Band — will perform with Algonquin, Melican, and Trottier students at this year’s annual Jazz Night concert on March 23.

During the day, Coffin, a saxophonist who also plays flute and clarinet, will host a clinic for Algonquin, Melican, and Trottier jazz students, and then will perform with ensembles from each of the schools at the evening concert.

Many of you are no doubt familiar with Coffin’s musical style, but here’s some more info from his bio:

Coffin has traveled the world with the Flecktones since 1997 and with DMB since 2008, performing with musicians of all walks. Along the way, Coffin has absorbed an astounding range of influences. “Whether it be New Orleans Second Line, African music, Indian Ragas, folk songs, Alan Lomax field recordings, jazz, or funk,” he says, “the spirit and breath of the music is what I take away from listening and playing. It’s what decides for me whether I like it or not.”

Known for sometimes playing alto and tenor sax simultaneously, with a nod to Rahsaan Roland Kirk, Coffin seeks out the extraordinary in his saxophone sound and in his technique of improvisation. Reaching for the unique is something Jeff makes an integral part of both his playing and teaching. In addition to the Flecktones, Jeff also leads his own group, The Mu’tet which takes it’s name for the word mutation, giving way to Jeff’s belief that music is constantly changing and mutating.

Jazz Night takes place on Wednesday, March 23 at 7:00 pm in the Algonquin Regional High School auditorium. Tickets are available at the door and are $5 for adults and $3 for students and seniors. Northborough Southborough Music Association members get in free of charge.