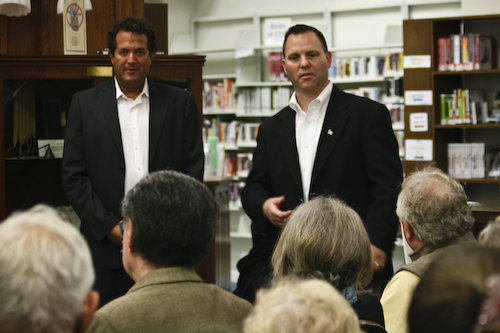 The two candidates for selectmen agreed on one thing at last night’s candidate forum: the biggest challenge facing Southborough is the budget. What they differed on was how to solve it.

For more than an hour last night candidates Dan Kolenda and Jeff Rosenberg answered questions from residents and shared their views on everything from balancing the budget to business development to what would make them a good leader.

Kolenda, an attorney for software company CA Technologies and an Iraq War veteran, said the key to balancing the town’s budget lies in identifying ways to make government more efficient, while at the same time bringing in more revenue through commercial development.

“Businesses need to have a seat at the table,” he told voters.

Kolenda said he is an advocate of limited taxation. “I will seek out areas where we can reduce costs, while raising revenues in a responsible way.”

Rosenberg, the owner of two small businesses in town, told voters he’s not afraid to make the hard decisions, saying the way to balance the budget is to cut the things we don’t need or don’t use.

“I’m going to use the word we weren’t allowed to say at Town Meeting,” he said. “We need to cut.” He listed budget items such as infrequently used equipment, technology, and services as candidates for trimming.

“I’m not advocating cuts,” Kolenda countered. “I’m advocating increasing revenue for the town and being as efficient as we can with what we currently have.”

Rosenberg said the town needs to focus on building up its reserve fund by encouraging businesses to move to town. “Lots of commercial property in this town is empty. We have space to bring these businesses in,” he said.

Rosenberg also said he would push to streamline the budget process and to impose audits to better understand how local tax dollars, along with state and federal money granted to the town, are spent. “The town in general has spending that is out of control,” he said.

Kolenda and Rosenberg both have children in the Southborough schools, and both agreed that school funding is important.

Kolenda said his time serving on the Regional School Committee convinced him the schools did all they could to eliminate excess, noting that both the regional and K-8 budgets were lowered from their original requests.

“I believe they came in where they could without affecting services,” Kolenda said of the K-8 budget.

Rosenberg said what bothered him about the school budget was a lack of transparency and what he called the “emotional function of budgeting.”

“When it comes to budgeting, we need to pull the emotions out and do the responsible thing” he said. “With more rational, less emotional decisions, we can come to an agreement on what our schools need and what we need as a town.”

Town elections are Monday, May 9, so mark your calendars.

4 Comments
Oldest
Newest Most Voted
Inline Feedbacks
View all comments
So where were they?

Did either of these gentlemen attend the recent Town Meeting? I can’t recall either one standing up and advocating for one position or another.

I just wanted to comment that you did a nice job summarizing what happened that evening. I was in attendance and walked away with pretty much the same impressions you write of here.

Thank you for all you do to keep Southborough informed. It is a wonderful service!

How about a vision statement that is researched with elected and appointed leadership and residents which is then approved by town meeting. This would provide strategic level guidance and priority setting driving our community into future years. It would facilitate town meeting debates where the collective body has set forth what the town’s actual priorities are. Currently we battle between the school and the municipal budgets, each setting its own priorities. What are the top five priorities of the town as a whole, so the annual or special meetings can advance a collectively agreed upon agenda?

Does the private sector run a 46 million dollar enterprise without a vision statement? If so, its does it ineffectively.