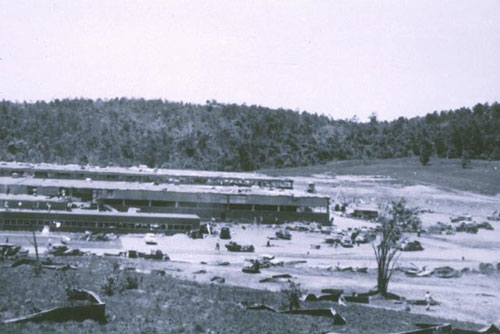 Above: Devastation in Southborough after a tornado in 1953 (photo from the National Weather Service)

The tornado in Joplin, Missouri has drawn comparisons to the one that ripped through our area in 1953 killing 90 people, including three right here in Southborough. I know many of you are familiar with this chapter in Southborough’s history, but I suspect some of you are not.

The powerful tornado first touched down in rural Petersham on June 7, 1953 at approximately 4:25 pm. It moved eastward at an estimated 35 mph, growing to 1-mile wide as it hit the city of Worcester. The tornado killed 60 people in Worcester alone and destroyed much of Assumption College. From there it moved through Shrewsbury and Westborough.

The tornado’s final stop was Southborough. This excerpt from Richard Noble’s Fences of Stone: A History of Southborough, Massachusetts

Winds reaching speeds of up to four hundred miles an hour tore along just south of Route 9, as the tornado hit Parkerville, Middle, Mount Vickery, Woodland, Cordaville, and Breakneck Hill roads in Southborough. The twister then moved east, through Fayville. At the Post Office there, in the ground floor of his home, Postmaster James J. Trioli heard a terrible noise – “like a whole bunch of trains” – and thought it was a hurricane. He sent his family down to the cellar, but as he started down the basement stairs, the tornado struck the house, and the building began to tear apart. His wife started up to help him, but the staircase collapsed and she was killed. Then the house fell in.

Postmaster Trioli was rescued from his home, but later died of his injuries. Another Fayville man died in his home. Much of Davco Farm on Breakneck Hill Road was destroyed.

“We were in the front part of the house when the tornado came in from the back (from the west),” Southborough resident Alice Phillipo told the Metrowest Daily News back in 2009. “When the thing came through, we could see some of the pieces of wood from people’s houses flying through the yard. We found pieces from somebody’s doghouse, and a chicken coop landed in our backyard.”

Any of you out there remember the Worcester Tornado of 1953? Or maybe you’ve heard the stories from those who lived through it? Share your memories in the comments.

My mother told me the story about her experience in Worcester. I wasn’t born yet, but my family lived on Highland St. She said there were no weather warnings, but the sky turned black as coal. She said she heard a large crash as the big Maple tree in the front yard tumbled down. Then there was the sound of a freight train…. and then silence. At this point the phone rang. It was memorial hospital calling my father in (who was a doctor). All doctors were to report to the hospitals immediately.

I don’t remember the tornado but I was in it along with my brother Rick, our mother Rita (Noborini) Mattioli, cousins Bob and Dennis Bezokas, Aunt Mary (Noborini) Bezokas and our grandfather Louis Noborini. I was an infant at that time and we were in the house next door to the Fayville Post Office. This house at 75 Turnpike Road survived the tornado as did all of us in the house at that time but it is no longer there given that it was taken down by the Bourdon’s to be rebuilt elsewhere in town.

My mother did pull my cousin Dennis to safety as he had been playing outside when the high winds came. All of the relatives said she saved his life. Dennis passed away at 75 Turnpike Road on June 4, 2003 which was nearly 50 years to the day of the tornado.

Our great Aunt Florence Trioli, Aunt Irmgard Noborini and 1 year old cousin Robert Noborini, who were in the Fayville Post Office, died due to asphyxiation caused by a gas leak. Our Great Uncle Jimmy Trioli, Fayville Postmaster and for a short time the Police Chief (police and public service runs on both sides of the family), did survive. He passed away in 1960.

One of the drivers from Tommy’s Taxi told me that apparently the tornado ended in the Sudbury reservoir around our house on Clemmons Street. Found that interesting …

My father told me that he was at home at 70 Turnpike Rd when it hit, it came and went in an instant, he saw part of it from the porch, Fayville had a great deal of damage, thankfully in spite of the damage the loss of life was no where near what it could have been. You should try to interview people who remember it and do a story, coming up fast on 60 years

What was interesting about that tornado was the narrowness of the path of destruction. In Joplin the bottom of the “cone” was, perhaps, a mile wide. In Southborough it took out one house on Parkerville Road, one on Mt. Vickery, one on Breakneck Hill before touching down in Fayville. There, it took down the home housing the post office, but left the adjacent houses (Bezokas, Fantony and Baldelli) intact. Before this story came up, I was unaware of any damage on Clemmons Street. The big damage was in Worcester. Less in Shrewsbury and Westorough (at South Street).

I remember looking up at the sky seeing shingles, tree branches and wood flying through the air. Then there was an awful calm as if everything stopped and the sky turned black. I was a member of the 726 Ordanance battalion of the Massachusetts National Guard. We were mobilized and sent to Worcester to set up road blocks to prevent looting and assist in the clean up.
Our 5 ton wrecker pulled cars out of trees, pulled chimneys off roofs, pulled down damaged houses. The damage was unbelievable. Tree lined streets were suddenly treeless. I remember the new Norton factory having the roof torn off. Worcester really looked like a devastated war zone.

I want to thank you all for sharing your stories. They’ve been simply fascinating to read.

Fascinating stories, and when you consider that the Joplin tornado was estimated at 200 mph, versus the 400 mph quoted in the book, amazing that more damage wasn’t inflicted.

Thanks for sharing these stories.

My piano teacher in Westborough had her home destroyed by that tornado. She & her daughter survived by clinging to a radiator inside the house. She lived near a farm and they saw cows flying through the air!

Hi,
Under the Worcester tornado on the web there are dozens of slides showing the damage there, including fires that started and flourished for lack of water hook-ups or maybe for engines that couldn’t get through… I just looked and it is incredible–there were 90 people killed just in Worcester (I think). The Souhborough experience will, of course, be part of the oral history of Southborough I’m working on for the Southborough Historical Society. It will include Fayville where the tornado was experienced by many of the people I’ve interviewed during the last year or so; some ran to the post office to try to remove the rubble and reach the victims. Many people say that Ray Davis, owner of the farm and orchards on Breakneck Hill Road, took movies as the tornado passed while he hung onto a light or telephone pole. It would be terrific to know if that’s a true story AND that someone knows where the film is!
We expect to have the book focusing on the memories of people who grew up in our town in the 1900s ready by the fall.

Donna, the film you menton do exist. It’s featured in the video Eastern Fury, a compilation of eastern US tornado clips, done by my good friend Bill Hark. It was actually something of a detective work trying to pin down the film. Davis had passed away but his daughter confirmed the rumor and even had a copy of the footage that was in bad shape. She mentioned a tv-station in Boston that had the original footage, and it was fortunatly in crisp condition. I’ve never seen it, but it supposedly shows the Davco farm being ripped apart. If you’re interested you can get the tape here: http://www.harkphoto.com/EasternFury.html

Another film buried in a storage building is rumored to exist, supposedly showing the tornado going through Worcester itself.

I do not remember the twister that hit in 1953. But I do hold onto the memories through my grandmothers words and her care of detail… the articles as well! The best of what I have is my mother!!! After many stories he told, the nick name he gave my mother, and the clippings my grand mother has passed on…As well as tell. I’ll remember the miracle child… My mother. Thank God for that. I’m blessed for family spared that day and will always pray for those that suffered. My prayers stay in the present.

It is so interesting, that while I was watching the coverage of the tornadoes this year, I was remembering the 1953 one that went through Southborough. I remember that we had no basement (we lived on the old Kidder Estate) and my mother pushed my sister Susan and I into the closet that was under our stairs. I do not know how she knew it was coming – I bet one of her friends called her on the phone. We could hear the roar as it went up Route 9 and some of the trees along the resevoir were damaged. I think my mother knew several of the women who died in the Fayville Post Office.
Since my marriage, I have lived in Illinois and Indiana and have spent many hours in our basements during tornado warnings – they didn’t have to tell me twice after 1953.
Judy Bailey Keneman