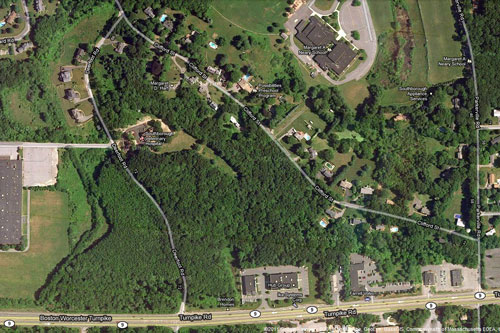 Above: A Westborough developer wants to build ten homes on land that lies between Deerfoot and Clifford Roads (via Google Maps)

Developer Bob Moss of Westborough has big plans for Southborough. He’s proposed a 140-unit 40B housing project on the south side of Route 9 near Crystal Pond Road. He also wants to purchase roughly 13.5 acres* of land on the other side of Route 9 between Deerfoot and Clifford Roads. Moss told selectmen more about his plans for that parcel at a meeting earlier this week.

Moss said he wants to build ten English cottage style homes that would be geared for the over 55 set, but without the restrictions of a typical over-55 community. Moss said the first house built will be his, and he expects to soon have commitments from friends and family on seven of the remaining nine homes.

The 2,500 to 2,800 square-foot, 3-bedroom homes will sell for $800K, Moss said. Portions of the property will be set aside for open space, and as many mature trees as possible will be saved to create what Moss called a “naturalized” setting.

“I believe it will be looked at and modeled by other communities,” Moss said of his planned development.

But whether Moss’s plans will come to fruition is still up in the air. The parcel of land was previously designated agricultural under the state’s Chapter 61a regulations. In exchange for tax breaks received over the years, before selling to a private interest, the land owner must give the town the right of first refusal.

Selectmen are still considering whether to exercise that option. Selectman John Rooney said open space is part of what makes Southborough unique, and giving up such parcels to development would affect the character of the town.

The family that owns the parcel — named only as the Lauredo Realty Trust — also has other adjoining lots on the market, and Selectman Boland suggested one of those could be used to build affordable housing for the town.

“If we were to pass on our option to exercise on the property, would the trust consider offering one of the other parcels to be dealt with individually to the town at a reduced rate to add to town’s affordable housing stock?” Boland asked.

As an alternative, Rooney suggested the trust could donate one of the lots to the town as open space.

If the town doesn’t want to purchase the property, it can also assign the rights to a third-party land conservation organization. Town Administrator Jean Kitchen said she has contacted area groups, but none so far have expressed interest in the land.

The town has 120 days to make a decision.

* I previously reported the parcel was 18 acres. That’s the amount of land that was in Chapter 61a, but the parcel Moss wants to buy is only 13.5 acres.