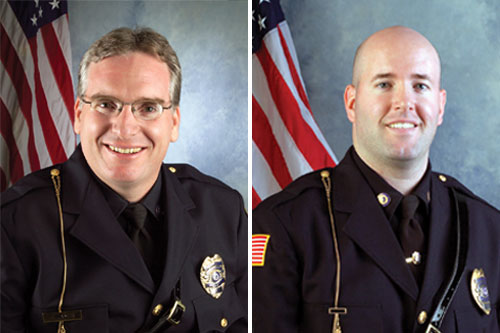 Above: Sergeants Sean James (left) and Ryan Newell (right) will vie for promotion to lieutenant (photos courtesy of the Southborough Police Department)

Three Southborough police officers will soon be moving up the ranks. On Wednesday selectmen will interview two members of the force for a new lieutenant position. They’ll also interview four officers with the aim of promoting two to the position of sergeant.

Nearly a year ago, the Board of Selectmen approved a plan to add a lieutenant to the Southborough police force. It’s a new position for the department, and Police Chief Jane Moran said it’s an important managerial one. She told selectmen at a meeting last year that a lieutenant would take on administrative, management, and personnel duties, as well as go out on patrol.

The candidates for lieutenant are Sgt. Sean James and Sgt. Ryan Newell.

Moran’s original proposal called for promoting one police officer to the position of sergeant to replace the sergeant who is promoted to lieutenant. Last week Moran asked Selectmen to promote a second officer to sergeant to help fill “gaps” in the schedule. The board ultimately voted to do so.

It won’t be the first time the Southborough Police Department has had four sergeants on the force. There were four under the command of former Police Chief Bill Weber, including then Sgt. Moran. When Moran was promoted to Interim Chief upon Webber’s death in 2008, and then appointed permanent chief in 2009, her position as sergeant was never backfilled, so the department has been operating with three.

The interviews start at 7:00 pm on Wednesday in the Hearing Room on the second floor of the Town House. They are open to the public.

Also on the selectmen’s agenda for Wednesday night is to approve the composition of the Fire Chief Screening Committee. Selectmen have been at odds over whether citizens should participate in the process of hiring a new fire chief to replace John Mauro Jr., who announced he will retire in September.

I still say hire an assessment company, then follow their recommendations. Citizen committees can be very biased.