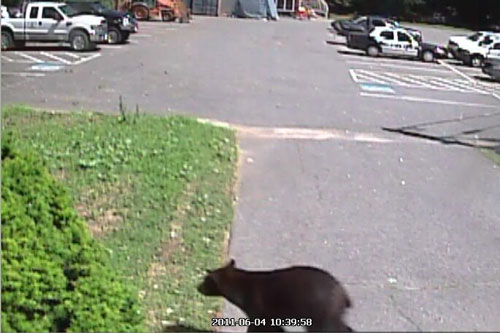 Above: A security camera captured the image of a black bear as it passed by the fire station on Saturday (photo courtesy of the Southborough Fire Department)

No telling if the black bear spotted on Saturday enjoyed his stay in Southborough or not, but he has apparently moved on. The Southborough Police Department said this morning they have not had any bear sighting reports since Saturday.

The juvenille black bear, estimated at 200 to 250 pounds, was first spotted on Saturday morning in the downtown area – including in the parking lot of the police and fire stations. He was also reportedly seen in other neighborhoods on the north side of town from School Street to Wyndemere Drive.

Whether the bear is roaming our woods and backyards or not, it’s probably still good practice to keep your trash covered — with a little bit of ammonia added to it for good measure — and to bring in your bird feeders.

If you do happen to spot the bear, you’re asked to contact the Southborough Police Department immediately at 508-485-2121.

Channel 7 news picked up the bear story — calling it “Bear Scare” (Really? We were scared?) — and posted this video. They managed to get some pretty good footage of the bear in action: