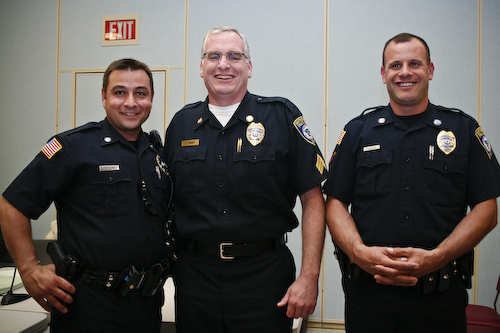 While commending both candidates in the running for a promotion to Southborough’s first-ever position of police lieutenant, the Board of Selectmen last night unanimously threw their support behind former Sergeant Sean James.

Both James and fellow Sergeant Ryan Newell participated in an assessment center last winter as part of the evaluation process. Boland said the scores for each candidate were nearly identical, but his more years of experience helped James “rise above.” James has been a police officer for 24 years, 10 of those with Southborough.

“It’s very challenging to try to choose one, but your credentials and your service has been outstanding,” Selectman Dan Kolenda told James at last night’s meeting.

In what they said was perhaps an even harder decision than the choice for lieutenant, selectmen voted to promote former Officers James DeLuca and Heath Widdis to the position of sergeant.

“Any one of you could clearly carry on this responsibility and do it at the highest level,” Selectman Rooney told the four candidates vying for the sergeant position.

But in the end, like with the lieutenant promotion, experience won the day, with 20-year veteran Widdis and 13-year veteran DeLuca getting the nod over their less experienced peers.

The selectmen were unanimous in their choice of Widdis and DeLuca, but they split on who should be promoted first and therefore have seniority. Police Chief Jane Moran said seniority “can be a big thing” and would come into play with selection of shifts and detail duty.

Rooney again wanted experience to be the differentiator and backed Widdis as the first to be promoted, but Boland and Kolenda were swayed by DeLuca’s higher scores from the assessment center evaluation and outvoted Rooney.

What to pay the sergeants was another issue. Moran originally recommended that Widdis be paid more than DeLuca because he had been filling in as the officer-in-charge, which has similar duties to a sergeant, for the past 18 months.

Selectmen didn’t like the idea of paying one sergeant more than the other, and proposed lowering Widdis’ increase to match DeLuca’s, which would have resulted in a negligible pay increase for Widdis. In the end they voted unanimously to keep Widdis’ pay at the level recommended by Moran, and then increase DeLuca’s to match.

Moran said while she had not budgeted for the additional increase, she would be able to make it work within the budget approved by Town Meeting in April.

James, DeLuca, and Widdis were all sworn into their new positions immediately after last night’s vote.