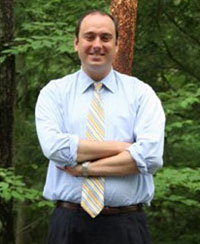 State Senator Jamie Eldridge, who represents Southborough among other towns, is one of a handful of elected officials invited to meet with President Barack Obama in Washington today. Perhaps he’ll pass along some of the concerns our Board of Selectmen shared with him this past spring.

Eldridge’s camp released this press release about his visit to Washington:

State Senator Jamie Eldridge (D-Acton) announced today that he will travel to Washington, D.C. this Friday (June 17th) to meet with members of the Obama administration and attend an intimate reception with the president. Eldridge is one of a small number of members of People For the American Way Foundation’s Young Elected Officials Network, a network of young progressives in elected office, who were invited to the White House to discuss important issues facing states and localities.

“I’m honored to have the opportunity to meet with President Obama, talk to him about the concerns of constituents in my district and discuss ways the federal government can help improve the lives of the people of the Middlesex & Worcester district. In particular, I hope we have the opportunity to learn more about his administration’s plans to promote economic development, particularly through investment in local infrastructure, and to discuss next steps in health care reform and the need for Washington to lead on comprehensive immigration reform,” said Eldridge.

The Young Elected Officials Network, a project of People For the American Way Foundation, provides support and training for over 600 progressive state, county and city elected officials from all 50 states.

“We are thrilled to be able to take the observations and concerns of so many young, progressive elected officials to President Obama and the Administration,” said Andrew Gillum, Executive Director of the Young Elected Officials Network. “These young leaders are on the front lines of progressive change, fighting for the values of fairness, equality and opportunity in their home communities. President Obama, a successful grassroots leader himself, understands that national movements are built by individual citizens and their elected representatives working hard to bring about positive change in their own communities. We’re tremendously proud to be able to help the president get to know our communities and discuss the issues affecting states and localities across the country.”

Just read unspecific nonsense in Eldridge’s press release. Not even an allusion to a private business creating a job. It’s all “movements” and “front lines of progressive change” and “fighting for the values of fairness, equality and opportunity in their home communities” where “the federal government can help improve the lives of the people.”

“I hope we have the opportunity to learn more about his administration’s plans to promote economic development, particularly through investment in local infrastructure, and to discuss next steps in health care reform and the need for Washington to lead on comprehensive immigration reform,” said Eldridge.”

Yikes! You’d think with all this organizing and networking and leadership going on they’d know the plan by now, wouldn’t you?

Folks, this is a look at the charlatan behind the curtain turning all the phoney knobs and politically correct dials to convince us they’re “working hard.” But in the end you know they’re cynically relying on the “greed” of the private sector to rekindle economic growth and eventually bail them out of their spendthrift promises, and they have the temerity to believe this will happen automatically despite them seeking their political fortunes by demonizing and punishing job creators and taxpayers.

The private sector is not going to bail out anybody right now. Businesses and entrepreneurs have to deal with the unknown of the market and the unknown of government taxes and regulations. These are not just Federal or State hurdles to overcome. All one has to do is read this blog to understand what small businesses go through in this town. If I currently had a plan or an idea to open a small business, I would investigate other places to put my money.

All you have to do is replace the word “progressive” with socialist,… that really is what this whole administration is all about.

I’ve found that when most conservatives say “socialist,” they mean “spends money on something I disapprove of”. It’s just an all-purpose insult, stripped of its original meaning.

This “socialist” stuff is nonsense – or intentional disinformation. American government is far less liberal now than it has been since FDR. It’s not even close to socialist. Taxes? Lower, especially on the wealthy. Financial regulation? Much less effective, (which caused this recession), and much more free market. Labor policy? Much more pro-corporate. Welfare? Radically reduced in the Clinton administration. Income distribution? Worse than in the 1920s – the GDP has doubled since 1980, and almost all of that extra income and wealth has gone to the top 1%. By policy, bought and paid for by the very wealthy, we’re killing the middle class. Socialism? We’re moving toward aristocracy – only the new “nobles” feel no obligation whatsoever to the rest of us.

If you think America is trending socialist, you would really have hated living in the 1950s, when practically everything in the economic environment was less nakedly capitalistic.

I have found that when most liberals say the phrase invest in the future that means raise taxes.

Conservatives believe that you should teach a man to fish and not just give him a fish.

If Obama is hardly a liberal, I agree. He has more socialist tendencies.   Let the free market do its job and get us out of this mess.

On my reading list for the summer will be Reckless Endangerment.  http://www.nytimes.com/2011/05/29/books/review/book-review-reckless-endangerment-by-gretchen-morgenson-and-joshua-rosner.html

actually Frank when i say “invest in the future” it means that education is a right not something that only the rich are allowed access to. I follow Jeffrey Canada and Cory Booker on Twitter and they are so invested not only in the children of today but in the parents as well. Not about taxes, about minds and the rights of all individuals to have access to health and well being.

i am all for reigning in spending what i am not for is stripping away from those who are making themselves better people and moving forward with their lives.

If Obama is not liberal enough – who is? I would also be curious to know – what about socialism you do not like?

So, Frank and dj, no response at all to the facts I raise – you just repeat the all-purpose, meaningless insult.

And Frank, conservatives don’t believe in teaching. They believe if you haven’t learned to fish, it’s your own fault and tough if you’re hungry. It wasn’t always this way, but conservatives in 21st century America are radicals.

I guess you did not care to read the NY Times book review I posted. May have some of the facts related to our current economic situation.

I have another recommendation for you: The Secret Knowledge by David Mamet. Could be life changing.

You are being a bit harsh. I am somewhere to the right of Attilla but I am a classic conservative (eg Barry Goldwater said “you don’t have to be straight to serve in the military just shoot straight”).

I think the conservative perspective is: “Give a man the opportunity to learn to fish, then if he is capable of fishing and does not do so let him go hungry.”

In one respect I agree with you, we should end the corporate welfare state. No more oil depletion allowances or ethanol subsidies or solar credits or Fanny Mae.

I would have let AIG, GM, and Chrysler go through chapter 11 rather than get a govt bail out. Their creditors would have taken a much larger hair cut if I were king of the forest.

In a previous job I did a lot of business in Europe. One thing that I was always amazed at was the extent that Continental European business people thought that Govt was part of their business. All important decisions had to be filtered through layers of regulations and incentives/disincentives before they could be taken. One need look no further than this model to understand the permanent disadvantage that European firms are burdened with vs their nimbler and more ruthless Asian and American competitors. This in turn has lead to very high structural unemployment and underemployment. Even as we speak this system is beginning to crumble. I don’t want our country to go down this path.

Well carrie (Kelly?) that was a wonderful reply. I actually checked out Jeffrey Canada and learned about the Harlem Children’s Zone. This educational none profit has done a remarkable job. Mr. Canada amassed a huge sum of money from private donors. I’ll bet a few of these donors are businessmen (and women) and successful entrepreneurs who had or started with nothing and made a lot of money. Some of them probably have conservative leanings or values.

But I will also bet none of them wish to fish from polluted ponds or have the kids from Harlem fish in polluted ponds either. These donors were simply looking for a way to invest in the future and give back what they have gained. They also knew that the NYC school system failed these kids and turned to a non-government entity to fix it. In other words, they invested their money wisely.

I still think you can benefit from my summer reading list. It is not too late.