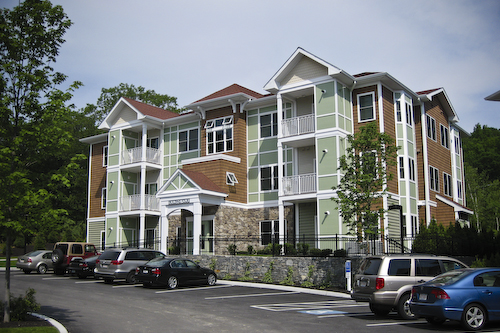 Above: The proposed 40B apartment complex in Southborough would be modeled after this one recently built in Shrewsbury

Westborough developer Bob Moss says he knows residents will have concerns about the 140-unit 40B apartment complex he wants to build in town. Comments on this blog suggest he’s right. But Moss told the Planning Board earlier this month he thinks residents will feel better once they know more about the project.

“I want the facts to get out there, so there aren’t misconceptions,” Moss told the board.

Moss said he has an agreement to pay $2.1M for 15 acres of land south of Route 9 along Crystal Pond Road. Those of you who have been in town a while might remember that’s the same parcel of land on which Avalon Bay wanted to build a 200-unit 40B development several years ago. When the economy took a dive, Avalon Bay abandoned the project.

Moss was involved in the proposed Avalon Bay development, but said his current plan bears little resemblance to the former project. Moss called the eleven 3-story apartment buildings he wants to construct “much more distinctive and more appealing” than similar types of projects.

Moss said he expects concerns about the number of school kids the project will bring to town – and the fact that property taxes from the prjoect may not cover the cost to educate those kids – will be a “big issue” with residents.

But Moss said families typically want 3-bedroom apartments, and his plan to make 60% of the units one bedroom and the other 40% two bedroom will “lock out families.”

“Case studies will show remarkably fewer kids than anyone thinks come out of these projects,” he told the Planning Board.

Per state regulations, 25% of the units in the complex, or 35 of the planned 140 apartments, will be marketed as affordable. Moss said he expects to rent the standard 2-bedroom apartments for $1700 and the 1-bedrooms for $750.

Moss said he expects increased traffic is another concern he’ll hear from residents. With an anticipated 7.3 cars per unit, Moss said the area will see an average of 900 car trips per day in and out of the complex. He proposes driveway access to Crystal Pond Road, with no direct access to Route 9. Moss said a traffic study will be conducted as part of the planning process.

The 40B off Crystal Pond Road isn’t the only project Moss is eying in town. He has also proposed a 10-home English cottage style development off Deerfoot Road just across Route 9 from the proposed 40B. The town recently waived its right of first refusal on the 13-acre parcel clearing the way for Moss to purchase it.

If you’re curious about the type of apartments Moss wants to build, swing by the new Madison Park development on Route 9 in Shrewsbury (just east of Route 140). Moss is wrapping up construction on that project and says the units in Southborough would be very similar.

Hi i’m a single mom and i just want to say i think that this is a great way to help people. That are looking for affordability.I have love southboro and love seeing the growth.I would even be intrested in a two bed rm when all is done. michelle

I am getting divorced and will be a single mom very soon.
I would be very interested in the condos as well.
Also, I have to sell our home and don’t want to leave southboro.
If there are any single moms out there who would like to
Share a home for rent please let me know. It will
Be very difficult on one income.
Mary

I can’t imaging how a project like this would not negatively impact the area – traffic, noise and pollution just to name a few. Also, where’s the market? Last I checked there is a glut of apartments in the neighboring towns (Westborough/Northborough/Marlborough) in a similar price range.

I blieve that when the town voted to continue with the regional high school or to build a separete Southborough high school on this land, that a proposal was made from the floow of town meeting to buy this land for the town’s possible future use.

Too bad we didn’t follow that suggestion. We
ll spend more on additional kids in the shcools and a zillion additional cars on Rt 9. And if anyone thinks there won’t be a ton of kids in thse units, just ask why there are school buses stopping at other 40B developments in town that were proposed as “plus 55” housing.

This builder has every right to develop this land in the most profitable way he can. It just seems that we Southborough voters seem to drop the ball on some of these long term issues.