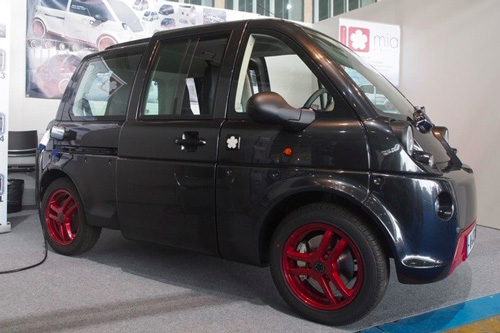 Above: Mia MicroBus (via AutoblogGreen.com)

Southborough-based Sevcon, Inc. recently announced it will provide the motor control technology for a novel new vehicle — an electric three-seater mini bus to be manufactured in Europe. AutoblogGreen describes the mini bus as “the secret lovechild of a VIP limousine and something from Volkswagen’s discarded concept pile.” Whatever you call it, it’s pretty cool that technology from our own back yard will play a role.

The three seat mia, which has been designed by former Volkswagen chief Murat Günak, is an exciting new development in urban EV vehicle technology and is one of the first series models on the market.

Under development since 2007, the mia is powered by a Leroy Somer asynchronous motor which will be controlled by Sevcon’s state-of-the-art Gen4 size 4 80V 350A motor control.

mia has turned to Sevcon, which is a world leader in motor control technology and a long established supplier to the automotive industry, as its motor controls provide the smallest controllers in the industry relative to power delivery.

The mia represents the very latest in compact, zero-emission urban vehicles, able to cover up to a distance of 130 km and fully chargeable within 3 hours.

The size 4 – one of four controllers in the Gen4 series ranging from size 2 to 8 – has been chosen to deliver smooth power transmission, improved efficiency and an extended range capability due to its ability to be closely characterized with the specific requirements of the mia.

The mia is one of a growing range of on-road electric vehicles using Gen4 controllers. Peugeot’s e-vivacity scooter, Vmoto’s E-max bike and Brammo’s Enertia street bike are all taking advantage of its performance benefits.

The mia will be manufactured in Cerizay, France, and has a scheduled annual production run of 12,000 vehicles a year.

It boasts a modern lightweight style and an innovative design concept that includes a central driver’s seat. The design provides the driver with a perfect view of the city. It also has sliding doors on both sides and an extremely spacious passenger compartment.

Sales of the mia will initially focus on public and private fleet operators with sales to private customers starting in 2012. The basic version of the three-seat mia will cost €19,500 including VAT and not considering any public incentives.

The mia is produced in Cerizay, France, by mia electric, which took over the electric cars divisions of the renowned French vehicle manufacturer Heuliez in July 2010. Heuliez has been designing and producing pure drive electric cars since 1984 and has manufactured over 6,500 electric cars including Citroen AX Electric, Peugeot 106 Electric and Citroen Saxo Electric. Once production of the mia begins, the Cerizay plant will employ 240 staff.