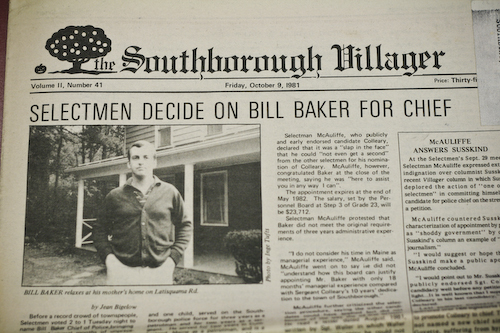 Above: Newly-appointed Police Chief Bill Baker on the front page of the Southborough Villager

Each week we take a look back at the top stories reported in the Southborough Villager 10 years, 20 years, and 30 years ago. Here are the stories that were making headlines during the week of October 3. If you have memories about any of these events, please share them in the comments.

10 years ago: White’s Corner closes after five decades on Route 9
The landmark White’s Corner restaurant, located at the intersection of Route 9 and Breakneck Hill Road where the Starbucks/Tomasso plaza is now, closed after 50 years in business. It was a sudden move, taking both patrons and some 40 staff members by surprise. The Rossi family who owned White’s Corner wouldn’t comment on their reasons for closing the business, but said they had no plans to reopen. Area restaurateurs said they were shocked by the news, which followed closely on the heels of the closing of the Oxford restaurant, an institution in Marlborough for decades. (Southborough Villager, October 5, 2001)

20 years ago: Funding drops, but Heritage Celebration will go on
The sagging economy was a topic of conversation in the early 1990’s just as it is today, and one of the things impacted by the downturn back then was Heritage Day. The Heritage Celebration Committee saw the town appropriate less and less to the event over the years, with only $1,200 allocated in 1991, about half what was needed to pay for the event. Organizers were undaunted, saying the celebration would go on. (Southborough Villager, October 3, 1991)

30 years ago: Selectmen decide on Bill Baker for Chief
Selectmen voted 2-1 to appoint 25-year-old Bill Baker Southborough’s next police chief after what was a protracted and controversial selection process (sound familiar?). Baker had served on the Southborough Police Department for three years as a patrolman and two years as a sergeant. Selectman Thomas McAuliffe opposed Baker’s appointment, instead backing then-Sergeant William Colleary who had ten years on the force. Baker would go on to serve for five years as chief, before leaving for the private sector in 1986. He was replaced as chief by Colleary. (Southborough Villager, October 9, 1981)