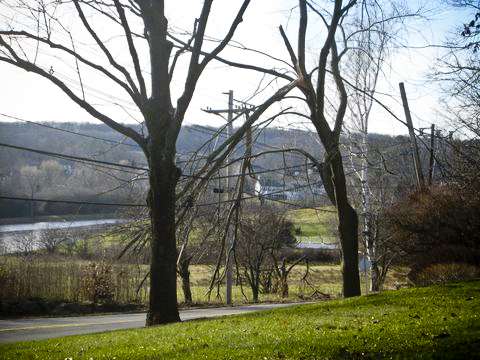 Above: A branch dangles over wires on Main Street (contributed photo)

A large branch hanging on the electrical wires along Main Street near Chestnut Hill Road is a power outage waiting to happen say area residents. But they say their attempts to get the problem addressed have fallen on deaf ears.

My Southborough reader Ann Port said she and other concerned neighbors have tried contacting the town, National Grid, and Verizon, but to no avail. Port said she went so far as to flag down a National Grid truck in the area. “It seems no one will take responsibility for removing the trees,” Port wrote in an email.

DPW Superintendent Karen Galligan said it’s National Grid, not the town, who is responsible for clearing the branches. “Anything on wires is the responsibility of National Grid,” she said.

The branch on Main Street isn’t the only one residents want National Grid to deal with. Commenter Sandy reports a tree on Oregon Road just before Garrison is leaning across the road with its branches draped across the wires.

Residents say if nothing is done, the branches may take down the wires in the next storm. “One good snowstorm and out go the lights!” wrote commenter Minimom. “Someone needs to be proactive here.”

Now might be a good time to remind you that Senator Jamie Eldridge is holding a public forum on the response by National Grid and other utilities to the October snowstorm. The forum will be held tomorrow night in Marlborough. Details here.

After National Grid’s response to two major damage storms, what else would you expect? I’ll say it again….they were much better when they were Mass Electric.

Susan, thank you so much for publicizing this and talking to the DPW on behalf of residents. You have moved above and beyond the wonderful information service you were already providing to the community! I have driven by this location several times and wondered why the “powers that be” (no pun intended) were just letting this branch sit there. With the DPW’s statement, residents now have a clarification, and know that if they want action, they need to appeal elsewhere, to their legislators or to National Grid directly. Thanks again for taking this up.

The electrical service is at the top of the poles. This looks more like Charter or Verizon FiOS to me. (But I’m not certain about this. It’s possible that the local electrical 240v service between the transformer and the customers is affected.) Assuming they have contracts with National Grid, they might exert a bit of pressure.

Verizon owns and replaces the utility poles in Southboro, not National Grid.

I am embarrassed to say you are absolutely correct! Verizon is responsible for the installation and maintenance of the poles.

Take a look at post # 8 re my telephone message to the National Grid president Marcy Reed.

At 3:30 today, Ms Reed called me back and thanked me for letting her know of this situation. She said she had already instructed the person in charge of pruning to resolve this and she had also contacted the National Grid person who handles communications with blogs to follow up.

I was very glad to hear from Ms Reed and we’ll see how fast this gets resolved.

Yeah but whose job is it to make sure National Grid clears the branches…..

Who in town is representing us in this situation whether it be Verizon or National Grid’s issue- Karen stated that it is National Grid ok fine who’s job is it to follow up now that the work gets done. I too drive by this and it just amazes me that someone doesn’t take the lead and get this fixed.

“…it just amazes me that someone doesn’t take the lead and get this fixed.”

Agreed, but its also OUR responsibility to do more than just post our frustration on this blog. Note that only 5 town residents showed up at last month’s meeting at Trottier to complain to National Grid about their performance.

Late this afternoon, I checked this blog for info from the recent meeting and read that Marcy Reed, the president of National Grid attended that meeting. So, I goggled National Grid, got their main administrative number, called and used the spell by name to call Ms Reed at 781-907-1760. I left a polite message on her voice mail advising her of the unresponsiveness of National Grid as shown on this blog, and asked her to view the blog and get this dangerous situation resolved.

I suggest EVERYONE call Ms. Reed and politely ask her to get this fixed. If she receives 25 or so calls on this, it will get fixed ASAP, just so she doesn’t have to wade through more voice mail.

I suggest you call National Grid president Marcy Reed at 781-907-1760 and politely ask her to have someone at National Grid get this resolved. She seems like a pretty reasonable person.