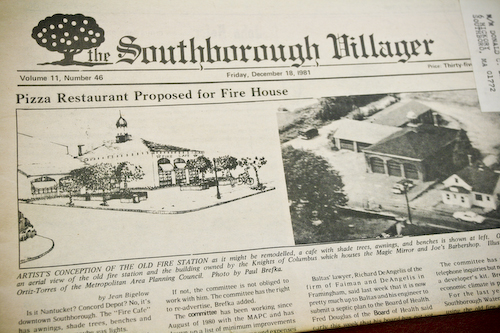 Above: An artist’s rendering of what the old fire station could become

Each week we take a look back at the top stories reported in the Southborough Villager 10 years, 20 years, and 30 years ago. Here are the stories that were making headlines during the week of December 19. If you have memories about any of these events, please share them in the comments.

10 years ago: (Not available)
The Southborough Library’s copy of the Villager from 10 years ago this week is missing, but if I had to guess, I’d say the lead story was probably about life returning to normal after the vote to renovate Algonquin the previous week. The debate over what to do to solve space issues at the high school consumed both Northborough and Southborough for months, if not years.

20 years ago: Baseball, soccer leagues debate use of Mooney Field
Representatives from Southborough baseball and soccer went before selectmen for help in settling a long-standing stalemate over the use of Mooney Field. At the time, the two leagues shared the field, but neither was happy about it. Southborough Little League wanted to erect a fence in the outfield to meet guidelines that would enable them to host national tournaments, but doing so would shrink the soccer field. For it’s part, the soccer league said Mooney Field was its only option as it waited on improvements to fields at Neary. Selectmen said they were at a loss on how to resolve the conflict, and asked the two leagues to work together to find a solution. (Southborough Villager, December 19, 1991)

30 years ago: Pizza restaurant proposed for Fire House
When the fire department moved to its current location adjacent to the police dpeartment, it left behind the old station across from Mauro’s Market. A committee was formed to help figure out what to do with the property. Angelo Baltas envisioned the building as the new home of the Southborough House of Pizza and pledged to pay $35,00 to purchase the property plus $123K to renovated the main portion of the building. While other developers expressed interst, Baltas was the only one to submit a proposal. (Southborough Villager, December 18, 1981)