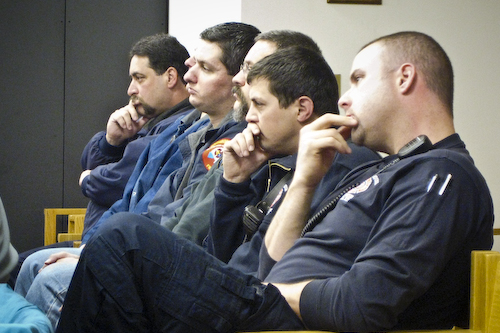 After 90 minutes of question and answer with the sole remaining candidate for Southborough’s fire chief position, selectmen said they were left with some doubt about whether he was the right choice, and so decided to delay their decision on the position.

Over the course of the interview last night, Fred Mitchell, a senior deputy fire chief in North Cumberland, RI, told selectmen about his experience, his leadership style, and what he could bring to the department, but selectmen said they wanted additional candidates to compare him to.

Mitchell, who said he followed his father into the fire service profession at age 15, was one of two finalists recommended by the Fire Chief Search Committee after months of screening. The other candidate, Brian Moriarty of Haverill, withdrew his name from consideration earlier this week.

“I am not prepared at this time to make a decision to have you be our next chief,” Selectman John Rooney told Mitchell. “That doesn’t mean I’m voting ‘no’ for you…What I need to do is evaluate your strengths and weaknesses in comparison to someone else.”

Selectman Bill Boland agreed saying he had some doubts about whether Mitchell was the right candidate. “You could be the guy,” Boland said. “If there were a couple of other candidates here, those doubts may have gone away.”

Calling his credentials “exemplary,” Selectman Dan Kolenda backed Mitchell as his choice for fire chief, but said he would not object to postponing the decision.

Despite their decision to delay, selectmen told Mitchell he’s still in the running. “As far as I’m concerned you’re still a candidate,” Boland said. “I haven’t said you’re not the guy.”

Rooney said his doubt over Mitchell stemmed from what he called the “Southborough factor.”

“I’m looking for someone who really wants to be chief in Southborough, not just be chief,” Rooney said after the meeting. “I felt he wanted to just be chief.”

The Southborough Fire Department has a history of promoting chiefs from within, but this time no internal candidates made it to the final round. Boland said the important thing was to find the best person for the job, regardless of whether they are internal or external.

Selectmen said they will talk about where to go next with the search process at their meeting on January 3. The board could decide to interview some of the candidates who were previously not advanced by the search committee.

Out of nearly 60 applicants, six candidates were asked to take part in an all-day assessment center in November, and of those six, two candidates – Mitchell and Moriarty – were advanced to the final round of interviews. It was revealed last night that some of the six who participated in the assessment center were internal candidates.

The January 3 meeting is shaping up to be a big one for selectmen. Also on the agenda for that evening is a discussion about the Swap Shop. I’ll share all the details on the agenda once it’s posted.

Can I just say – great photo. They all have basically the same expression!

I am glad that the BOS decided to defer this decision. I was disappointed that none of our current fire fighters “made the cut.” I think we have real talent in-house (and in that photo) and their dedication to and familiarity with our community should be considered in this decision.

Let’s hope the BOS will do the right thing and re-open the search. If there are ANY doubts, they should not go with this guy because he is the only one. My only concern is how much more money they will spend on the search. The looks on the firefighters faces says it all.

Reopen the search until the inhouse candidates make the finals, and if not next time then keep reopening it.