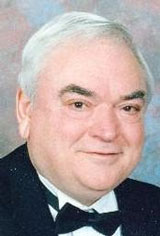 Edward Kevin Harvey, 73, of Bellingham passed away peacefully at home surrounded by his family and friends on Tuesday, December 27, 2011. He was the beloved husband of 46 years to Kathleen M. (Shaw) Harvey. He was the loving son of the late E. Harry and Julia (Jones) Harvey of County Roscommon, Ireland.

Kevin was born in New York City on February 21, 1938. He spent his formative years in Strokestown, County Roscommon, Ireland. A graduate of Summerhill College in County Sligo, he later returned to New York and graduated from Fordham University in 1967. During that time, he served as a United States Marine Reservist for six years.

Along with his wife, Kevin is survived by his children, E. Brian Harvey and his wife, Eileen (Carson) of Southborough, Elizabeth Harvey of Bellingham and Eileen Harvey Hosford of Franklin. He leaves his loving Grandchildren, E. Patrick, James and Katherine Harvey and Ryan Hosford. He will be sadly missed by Sister-in-Law Jeanne and husband Phil Garra of Park Ridge, NJ, Brothers-in-Law James Shaw and wife Michele of Tobyhanna, PA and William Shaw and wife Rose of Thompson Station, TN.

Kevin was the elected Bellingham Representative of the Blackstone Valley Regional Vocational High School for 21 years, a school he passionately advocated for and was dedicated to the advancement of the children in his district. In 2000, he received a Lifetime Achievement Award, which recognized his contributions to the children of Bellingham. A Vice President of International Sales for Shrink Packaging Systems, Inc. of Nashua, NH, he traveled extensively throughout the world during his career. Retiring in 2004, due to illness, he spent his final years enjoying his leisure time at home with his family and friends.

His funeral will be held on Friday, December 30th at 10:00AM at St. Blaise Church, 1158 South Main Street (Rte 126), Bellingham, MA. Interment will follow at Union Cemetery, Mechanic St. (Rte 140), Bellingham. Visiting hours are on Thursday, December 29th from 4:00 to 8:00PM at St. Blaise Church, 1158 South Main Street, Bellingham. Relatives and friends are invited to attend. In lieu of flowers, the family request donations may be made to the Alzheimer’s Association , 311 Arsenal Street, Watertown, MA 02472. Funeral arrangements are under the direction of Cartiers Funeral Home, Bellingham, MA. To sign guest book visit www.cartiersfuneralhome.com.