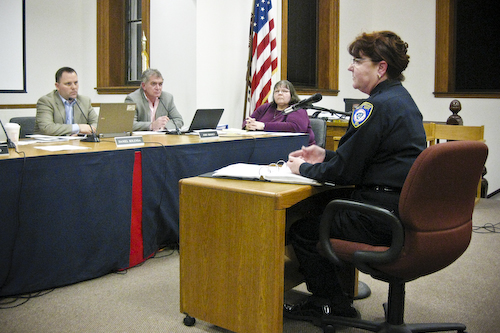 Above: Police Chief Jane Moran talks budgets with the Board of Selectmen

Southborough’s public safety chiefs went before the Board of Selectmen and Advisory Committee last night to make the case for a level-service budget for next year. Both Interim Fire Chief Michael Dunne and Police Chief Jane Moran said proposed cuts would harm their already understaffed departments.

“You are going to have some shifts with three people,” he told Selectmen and Advisory Committee members. “That’s just unsafe for the firefighters, and I don’t think it’s what the residents of Southborough expect.”

Dunne also said the proposed budget does not build in enough money for training on-call and full-time personnel.

Moran told board members the police department is also running lean. The department currently has 13 full-time officers, the same number it had in 2000, but Moran said call volumes have increased significantly over the past decade.

She also said the nature of crimes today – things like home break-ins and domestic violence – are more time-consuming than the types of calls they handled in 2000. “We don’t just sit around anymore. We jump from call to call,” she said.

Selectmen and Advisory Committee members asked questions of both chiefs, but did not say whether they would support a level-service budget for either department.

You can read another take on last night’s discussion in this article by the Metrowest Daily News.

How can the BOS consistently approve compensation increases for town employees and then request that department heads submit budgets 1% lower than last year?

Good point Earl. I also think if Moran needs more money, she should call Gobron or the School Committee.They are the budget hogs.

I am very confused about this discussion as it relates to the Police Dept. In the article the chief used the term “catastrophic” when speaking of the impact of a 1% budget reduction. Yet when I read the police log posted in this blog it seem that they are far from over worked. My guess is that 90% of the calls/responses are to check on 911 hangups or traffic accidents.

I looked at that Southboro Police Web site and they list 9 patrol officers, 4 Sgt’s, 1 Lt. and a chief. Now I don’t claim to be an expert on law enforcement but it is easy to understand why they are so lean. 40% of the Southboro Police force is supervisory.

Maybe there are too many chiefs and not enough Indians!!

Just to point something out….The Northborough Fire Department maintains full control of the money it generates from medical billing. This allows them to make new ambulance purchases as well as other equipment without having to further burden the taxpayers. At one point, these monies were used to supplement EMS staffing, although this may have changed. Southborough Fire used to control the money from billing, but under a previous administration, the money was transferred to, I believe, the general account.

John,
You are correct. I have on a number of occasions suggested that the town set up an
Enterprise Fund , to cover some of the Fire Department Ambulance costs this is an accounting mechanism allowing a community to demonstrate to the public that a portion of such service is recovered through billing charges .MGL Ch 44 s. 53F.
It would require up front funding.
Another; Revolving Fund, MGL Ch.44 s.53E stipulates that each fund must be reauthorized each year at annual town meeting. Allows a communty to raise revenues from a specific service and use those revenues to support the service without appropriation. The town has collected in the past as much as $250,000.-$300,000. in ambulance fees deposited into the General Fund used to balance other budgets and at times to purchase a new ambulance.