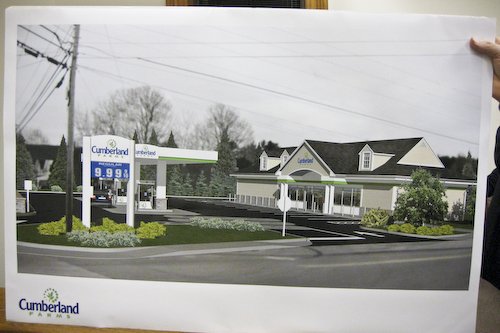 Above: A rendering shows the style the new Cumberland Farms store will have

The Cumberland Farms on Route 9 west just before the interchange with Route 495 will be getting a new look. Cumberland Farms president, and Southborough resident, Ari Haseotes told the Zoning Board of Appeals last month he plans to raze the current structure and build a new one in its place.

“I think people are going to be very proud of this when it’s done,” he said.

A civil engineer for the project told the board they want to demolish the old store and replace it with a new one that will sport a Colonial-style exterior. They will also reconfigure the current four gas dispensers, adding another two in the process. Cars will enter via Route 9, with the only exit being to Park Street on the west side of the property.

Haseotes said the new configuration will improve traffic flow on the site. Additional pumps will accommodate more cars during peak hours, while new parking spaces directly in front of the store will encourage patrons to pull forward when they’re done gassing up instead of remaining parked at the pump like they do now.

The new store will not have a Dunkin Donuts like it does now.

The project has been before the Zoning Board of Appeals, as well as the Planning Board, for several months now and has undergone a number of revisions. ZBA members who were originally lukewarm on the plan said they were happy with how it has evolved, noting they particularly liked the Colonial style the store will have.

“I compliment you,” ZBA member Leo Bartolini told Haseotes and his team. “The design adds to the character of the town.”

The ZBA unanimously approved requests for front and rear setback variances. Developers still need approval from the Planning Board, which will discuss the project next at their meeting on February 13.

It looks nice, however I’m not a big fan of the gas price they have showing…..

Yep – there were plenty of jokes about that at the ZBA meeting too!

No Dunkin Donuts?
I humbly disagree with Mr. Bartoloni regarding adding character. It’s really just another plastic, corporate franchise, board approved and boring structure.
Being new should not be enough in this day and age.
Was there a design competition that solicited ideas from architectural students or small businesses in the area?
Is there anything sustainable or redeeming about a new building with less charm than a 1970’s McDonalds?

I bet the whole exchange could be paraphrased like this:
Haseotis-I want to make business bigger so more people can park and more people can buy my product.
Town-No we don’t like the color of the fake shutters!
Haseotis-I throw in fake dormers!
Town-Fake dormers! WOW! OK and you can have 10 feet of setback for each one!

We go there at least 3 times a month to gas up on the way north or south, always get some coffee too. Not likely to go inside that new building and not just because there won’t be any good coffee.

Forgive the disrespect but when a company has a bunch of money to spend I just can’t stand it when they are so clearly making changes to enhance business and never once considering the impact of consumption for consumption sake, ugly ugly architecture, and bad coffee.

1st World Problem for sure!

I agree Matthew. I would take the simple integrity of the converted existing structure over the plastic “colorforms” stage-set, fake colonial of this thing any day. Add to it the amount of natrual resources that will be wasted making a perfectly serviceable business a little better and it adds up to a colossal waste. People who stop there for gas now, will stop there later. A gas station is about location, convernience, price and the odd coffee and snack. Their prices are certainly not going to go down after a major renovation like this. No one is going to go out of their way to buy their gas here because of fake colonial columns and dormers. At least the current structure has a bit of history and character.

I have to say that I ran in there Saturday night when I couldn’t get coffee cream in town for Sunday morning! The price was right and the product was as good as I get at the grocery store. I couldn’t get that down town because Mauros was closed, and Stoneybrook & Walgreens were too expensive. I wanted to buy cream not the cow! I will welcome the new store and I disagree that it is “ugly, ugly architecture”. We hae another Dunkins in town so that shouldn’t be an issue. However, some people like to stop there, grab coffee and get on the highway. I have heard that Cumberland Farms has good coffee though and probably at a better price and they do all kinds of freebies and specials. Sounds win-win to me.

It’s a Cumberland Farms, right? It’s not supposed to be an architectural work of art. The current one looks to me like a gas station, which I have no problem with it looking that way. This is sure a step up from that. There are plenty other structures on Rt9 that look a million times worse then this (both rendered and present day). A business wants to streamline their process and everyone jumps on them because it’s not good enough. Last time I checked they were there to make money or else the lot would be an empty structure.

The current one WAS a gas station. I think that upgrading the facility as well as improving traffic is a plus all the way around.

After all, it IS a gas station and a mini-mart and it IS located on Rt. 9! Would you all prefer the “antique-y”, nostalgic, shabby chic look of, oh, I don’t know…..let’s say…..Fitzie’s?

And, why wouldn’t the gentleman want “more parking so more people can buy things”…..isn’t that the whole point of his business? He’d be a pretty poor businessman if he DIDN’T want more parking.

I applaud the man.

I could not agree more. Its freakin Route 9 not main street,. Who cares what kind of building he has, just keep the price of gas cheap! Maybe he should model it after some of the other quaint buildings in town – Say – Falconi’s Gas Station? Mauros Market? The Zoning board needs to get over themselves.

Variances are for hardship?

We deny a guy who wants a farmstand and bakery but give one for a gas station?

I had the same thought. Is it because the Capasso site is in a much more residential area?