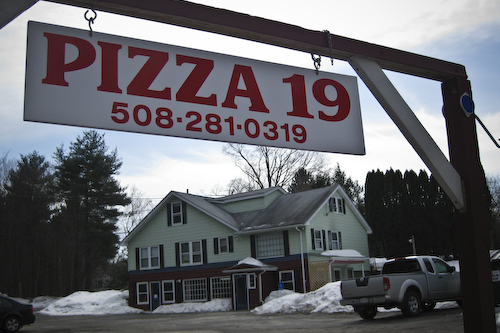 Southborough shops and eateries have been making some changes lately – both in town and out. We talked about the Cumberland Farms on Route 9 yesterday, and here’s some more news from the sector.

New owner for Pizza 19
Less than a year after opening at the intersection of Framingham Road and Newton Street, Pizza 19 has changed ownership. At a recent hearing to transfer the common victualler license, Yacoub Abdelshahid told Selectmen he took over the business from Pedro Franco last fall.

Pizza 19 came under fire from neighbors when it opened in February 2011 over concerns about noise, traffic, and alleged zoning violations. In agreeing to transfer the license, selectmen urged Abdelshahid to keep his neighbors in mind.

New owner for Rose Garden
The Rose Garden, a Chinese restaurant located on Southville Road just before the Ashland border, has been around considerably longer than Pizza 19, but it too has a new owner. Liangfeng Chen told selectmen last month he would be taking over from the previous owner who plans to retire.

While Chen has experience in the restaurant business, selectmen originally deferred their decision on transferring the liquor license to him over concerns he did not know enough about Massachusetts liquors laws. Chen sought additional training and convinced selectmen to approve the transfer at a subsequent hearing.

Selectmen Bill Boland said they needed to be certain Chen understood the rules and regulations, especially since the restaurant is located in a residential area.

Stony Brook Market looks to expand
Salim and Fadi Kassouf, the brothers behind Stony Brook Market in the Town Center Plaza, want to bring their business to Marlborough. The two have applied for a license to open a second convenience store of the same name at the old Vin Bin location on South Bolton Street, but the Metrowest Daily News reports Marlborough officials are split on the plan.

While one member of the Marlborough licensing board said he was impressed with the Kassouf’s Southborough store and thought it would be a good addition to the plaza, another expressed concern that the convenience store, which would sell beer and wine, would undercut Vin Bin’s business. Vin Bin’s new location is just across Main Street in the old fire station.

A decision on the license was tabled for a future date.