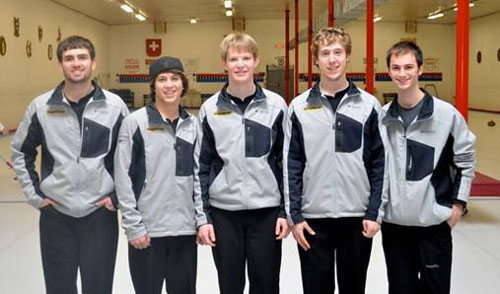 What a weekend for Southborough brothers Stephen and Korey Dropkin. The pair led their team to a gold medal in the Men’s US Junior Nationals Curling Championship. The win means they now go on to represent the US in the world competition coming up next month in Sweden.

Team Dropkin didn’t lose a single of their nine tournament matches in Madison, WI. In the championship game on Saturday they game surged ahead early, and then successfully held off a come-from-behind rally by hometown favorite Wisconsin.

Dropkin’s team started aggressive with four points in the first end and added four more in the third end to lead 8-1 after just three ends of play. Morton (McFarland, Wis.) and teammates Marcus Fonger (Cottage Grove, Wis.), Tommy Juszczyk (Madison, Wis.), Calvin Weber (McFarland, Wis.) and Chris Bond (Madison, Wis.) staged a comeback thereafter scoring a single in the fourth and stealing a single in each of the next three ends to pull within three points at 8-5. Massachusetts scored one more in the eighth end, but the Wisconsin team kept things interesting with a deuce in the ninth to pull within two points with one end remaining in the match. Wisconsin would steal one more point but it was not enough to complete the comeback. (read more)

This was the ninth junior nationals showing for Stephen Dropkin, but it’s the first time he and his team captured gold. Last year Team Dropkin took home the silver, while two years ago they came in fourth. It was also the first time a team from Massachusetts won the tournament since it was founded in 1974.

Joining Stephen and Korey on the trip to the world championship in Sweden will be teammates homas Howell of Plainfield, NJ, Derek Corbett of Rochester, NY, and Cameron Ross of Princeton Junction, NJ.

Back in January, Korey Dropkin won the bronze medal in mixed doubles curling with teammate Marina Verenich of Russia at the inaugural 2012 Winter Youth Olympic Games in Innsbruck, Austria.