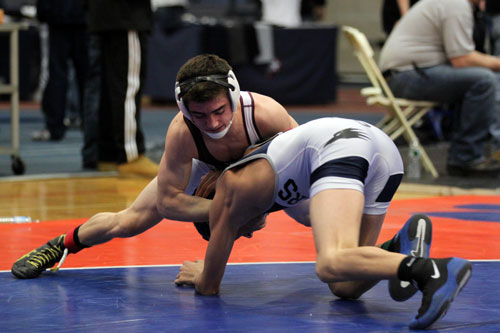 Above: Southborough’s Joe Cozzolino on the mat at the division tournament last weekend (photo by Katarina Wrin)

Four Algonquin wrestlers are heading to the Individual Division 1 State Tournament on Saturday. They qualified after strong showings in the division sectional tournament last weekend. My Southborough reader Katarina sent in this recap of the division meet:

Albert Marsocci (220 lbs.) took second place and was the top place winner for Algonquin. Finishing in third place were Joe Cozzolino (120 lbs.), Alex Mazzola (170 lbs.), and James Officer (285 lbs.). These four wrestlers will represent Algonquin at the Individual Division 1 State championships. Placing fifth in the tournament and advancing to states as alternates are Chris Steidler (126), Zach Marcoulier (138), Carter Guzzi (152), and Matt Cofer (195). Placing sixth at the tournament was Mike Ryan at 182 lbs.

Congratulations to Zach Marcoulier on the 100th win of his career as he joins an elite group of Algonquin Wrestlers to mark that achievement. Previous members of the 100 Win Club are Baird Lashley (1989), Michael Wrin (2010) and Dylan Foley (2011).

The Algonquin Wrestling team finished fourth at the tournament and will be one of the teams representing central Mass in the Division 1 Team State Tournament. The top 16 Division 1 teams in Massachusetts wrestle on Sunday, February 19 at Tsongas Arena in Lowell.

The individual state tournament takes place on Saturday, February 11 at Weymouth High School. Join me in wishing our Algonquin competitors the best of luck!

Check out photos of Algonquin wrestlers in action at the division tournament on Flickr.