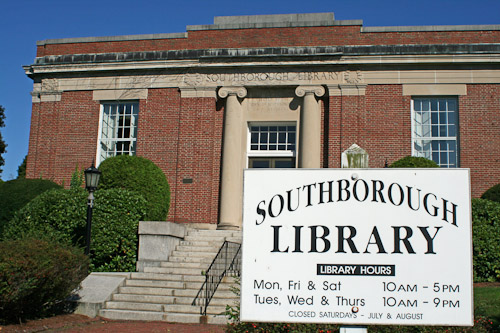 I attended the Board of Selectmen meeting last night from the comfort of my couch which meant I could hear most, but not all, of the compelling discussion about the library’s budget (remember those mics, folks!). Given that, I’ll let Brad from the Metrowest Daily News do the heavy lifting in recaping the discussion:

After a frank discussion with the Library Trustees that included unflattering information about how Southborough’s library funding compares with other well-to-do towns, selectmen last night voted to recommend the trustees’ requested 2.7 percent budget increase for fiscal 2013…

…The library has asked for $404,441, a 2.7 percent increase that Library Director Jane Cain said would be needed to meet the state’s municipal appropriation requirement — the lowest amount the town could spend to stay certified by the Massachusetts Board of Library Commissioners without having to apply for a waiver.

In agreeing to support the budget request, Selectman John Rooney said his driving concern was not whether the town would get a waiver (which most agreed it likely would), but rather the loss in service a reduced budget represents.

Library Director Cain told the board a reduced budget would primarily impact the the library’s ability to purchase new books, DVDs, and other materials. “What happens is we’re not able to provide what (patrons) are looking for,” she said.

The Advisory Committee also participated in last night’s discussion but did not vote on whether to support the proposed hike.

Head on over to the MWDN to read their article for more details on the discussion – including how Southborough’s library budget compares to that of other towns – and then come back here and let me know what you think. Will you support a 2.7% increase in the library budget at Town Meeting? Share your thoughts in the comments below.