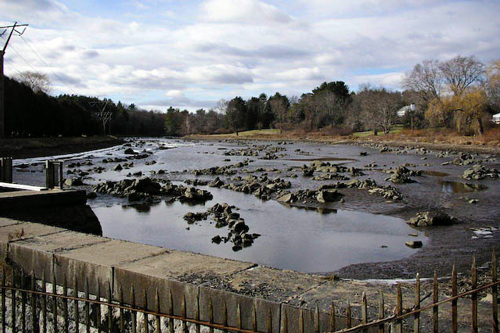 Above: The open channel after being drained for dam work last year (contributed photo)

The Sudbury Reservoir in Southborough will soon look a bit different than normal. This week the MWRA has begun lowering the water level of the reservoir, and of the open channel west of Deerfoot Road, to conduct dam repairs and erosion control.

A lower water level will allow the MWRA to access and make repairs to two dams in Southborough – the Fayville Dam at the MWRA facility off Boston Road, and the smaller Deerfoot Road dam.

The water level will be temporarily lowered by up to five feet. In a press release, the MWRA said the level will be low enough for residents to see mud flats in the reservoir. MWRA spokesman Len Cawley told me last fall – when the work was originally scheduled to happen – that the open channel would be drained to “a trickle.”

Cawley said the water will be lowered gradually, so fish that live in the open channel will have an opportunity to follow the water downstream, but he acknowledged not all will successfully make the journey.

“I think it will be a buffet for the herons,” he said.

The dam work is scheduled to begin around April 1 and will last six to eight weeks, weather permitting. Once the work is complete, the water level in the reservoir and open channel will be restored to normal levels.

To see photos of the open channel the last time the MWRA lowered it to conduct dam work, see this post.

This past Sunday, my wife & I noticed an ‘island’ near the White Bagley/Latisquama area that isn’t usually visible, and the waterline was definitely lower….

You’ll also be able to notice the foundations of some of the houses moved to other places in town when the reservoir was created… Off White Bagley Road looking east is where I remember the most but perhaps that mystery by the island mentioned by someone else is also. My memory isn’t of seeing houses when they were there — that was about 120 years ago, but of foundations at other times the water was lower.

Anyone know where this “open channel” is? I.e. is it accessible from public access areas, or is it near the dam on Rte. 30, which is restricted property?

The open channel is the water that runs from Northborough Road and continues behind the houses along Main Street, and finally empties into the reservior system at Parkerville Road.

Chris, John is correct – sorry, I should have been more clear in my post. You can walk alongside a portion of the open channel by following the Reservoir Trail west of the Deerfoot Road dam. You can also get to it through the Beals Preserve.

My buddies and I used to swim out to that “island” off White Bagley and stand on it. At the right level it looks like you are standing on the water if you were driving by. It is just a rocky “sand bar.”