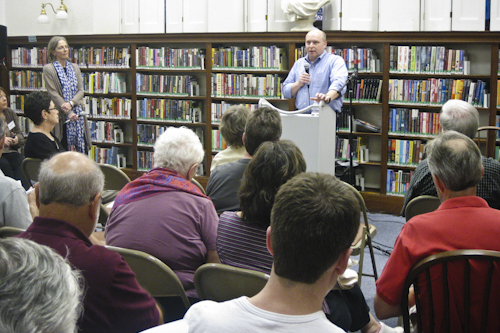 Does Southborough need a bigger Board of Selectmen? Would the town benefit if we hired a so-called strong town manager to handle day-to-day operations? Voters will consider both those issues when Article 4 comes up at town meeting next month, but some in town say voters should get to decide on the two issues separately.

In recently-filed minority report, Drafting Committee member Leo Barolini, who is also running for selectman this year, said Article 4 should be split into two separate articles, one for creating a five-member Board of Selectmen and one for creating the position of town manager.

While he favors increasing the size of the Board of Selectmen from three members to five, Bartolini said the town should have more time to consider whether it needs a town manager.

Bartolini said he originally supported the idea of a town manager, but his work on the committee drafting the legislation has changed his mind. He now says the position would be too powerful.

“During the last nine months that the Committee has met, I have changed my mind because I have realized that supporting this article will give a lot of power to a Town Manager and take that power away from an elected Board with strong commitments and concerns for the Town of Southborough, namely the Board of Selectmen,” Bartolini wrote in his report.

Bartolini’s stance on splitting Article 4 echoes that of a number of residents who attended last week’s public forum on the proposed town manager legislation.

“Why does it all have to be part of same article?” Former Town Moderator John Wilson asked. “I just think they’re two very separate issues.”

Drafting Committee Chairman Joseph Laning told the crowd gathered at the library that since both changes – creating a town manager position and increasing the size of the Board of Selectmen – require special legislation, it made sense to consider them together.

Laning said it would be up to the current town moderator and town counsel to determine how the logistics would work, but Town Meeting voters have the option of making a motion to split Article 4. But he cautioned it would require careful thought since the two issues are so intertwined.

Selectman John Rooney warned splitting the article could end up having the opposite effect of making our government less efficient. “The worst thing that could happen is if the article is divided and a five-member board is approved but a town manager is not,” he said.

What do you think? Are the proposals for a five-member Board of Selectmen and a town manager separate issues? Would you support one but not the other? Share your thoughts in the comments below. If you’d like to read Bartolini’s minority report in full, you’ll find it here.)