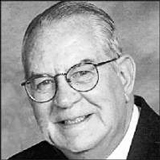 WORCESTER/HOLDEN – Arthur F. Powell, MD, 81, of Briarwood Circle, died peacefully at home Friday, April 13, 2012, under the loving care of his family after an illness. He was born and raised in Roslindale, the son of Arthur G. and Edna G. (Tidd) Powell and lived 45 years in Holden before moving to Worcester in 2009.

Arthur graduated from Boston Latin School in 1948, was vice president of his class, and considered his induction into the Varsity Athletic Hall of Fame to be one of his greatest achievements. In 1952, he graduated cum laude and President of his class at Boston College where he received a Bachelor’s degree in Biology. From 1952 to 1956, he attended and received his medical degree from Tufts University Medical School. In 1953 while vacationing at Nantasket Beach in Hull, Arthur met and fell in love with Joan Lamphier, the love of his life; they wed and renewed their vows fifty years later in Hull. Following a one-year rotation internship at Worcester City Hospital, Arthur enlisted in the United States Air Force where he served as a Captain and flight surgeon for three years. He then completed his residency training in obstetrics, gynecology and general surgery at Wayne State Affiliated Hospitals in Detroit, Michigan.

In 1964, Arthur opened an office on Main Street in Holden and in 1972, joined the Lincoln OB-GYN Associates in Worcester retiring in 1995. He was a fellow of the American College of Obstetrics and Gynecology and certified by the American Board of OB-GYN.

Arthur was a Boston College Eagle’s football fan and held season tickets for over 30 years. He always looked forward to family gatherings and reunions which he and his wife hosted for many years at their summer camp at Lake Boon in Stow. He enjoyed traveling with his wife which they did extensively around the world. Although fully committed and passionate about his chosen profession as a physician, his family always came first and he rarely missed one of his children’s sporting events or recitals. He will be sadly missed by his grandchildren who loved him dearly and his special Maltese friend, Bella.

He is survived and will be greatly missed by his loving wife of 56 years, Joan (Lamphier) Powell; three sons, Arthur F. Powell, Jr. and his partner Sue of Holden, James D. Powell and his wife Dawn of Worcester, and Richard M. Powell and his wife Christine of New Rochelle, NY; three daughters, Barbara E. Reed and her husband George of Dallas, Texas, Nancy J. Baptiste of Southborough, and Patricia A. Watson and her husband Virgil of Reno, Nevada; a brother, Norman F. Powell of Mansfield; 13 grandchildren; nephews and nieces. A daughter, Donna M. Powell died in 1966. He is also predeceased by a sister, Ruth M. Grove.

To share a memory or offer a condolence, please visit www.milesfuneralhome.com.