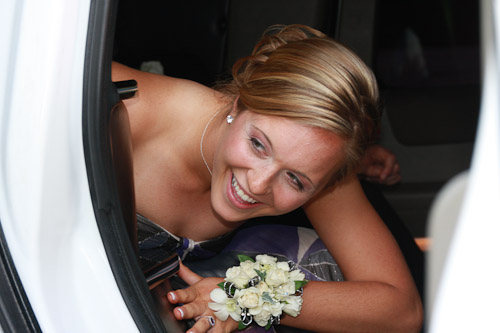 Above: Southborough resident Juila Murphy on her way to a past prom (photo by Margaret Keigh Doyle)

You’re likely to see a few limos cruising around Southborough tomorrow night, as Algonquin students head to the school’s Junior Prom. The party takes place at Union Station in Worcester, with a post-prom party at the New England Sports Center in Marlborough.

Students going to the prom are asked to sign a contract pledging to keep the party alcohol and drug free. To make sure the message hits home, members of the Police, Fire and EMS departments of Northborough and Southborough staged a mock car crash at Algonquin earlier this week. It’s an exercise they go through every year in an effort to convince students of the dangers of driving while impaired.

The post-prom party, another alcohol- and drug-free event, runs from midnight to 5:00 am. Buses will transport students from Algonquin to the New England Sports Center where they’ll keep the party going with more music, an obstacle course, ice skating, free arcade games, a mechanical bull, and more. Sounds…exhausting.