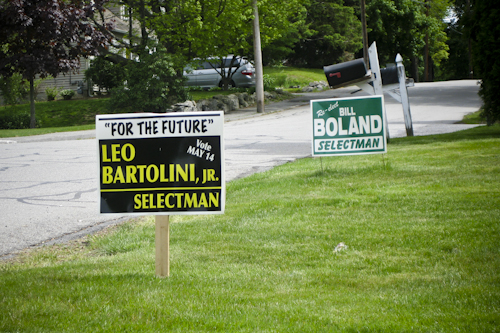 Southborough residents will make their choice today in two hotly contested races. What started off as a low-key race, didn’t stay that way as incumbent Bill Boland and challenger Leo Bartolini vie for a seat on the Board of Selectmen. The race has been the focus of much discussion here on the blog and elsewhere since late last week. Whether the debate translates into a big turnout at the polls (I hope so) remains to be seen.

In Southborough’s only other contested race, Andrew Mills and Sam Stivers are both trying for a single 1-year seat on the Planning Board. Mills has been sitting on the board since he was appointed late last spring after member Mary Hynes retired. Stivers was the former chairman of the Zoning Board of Appeals.

Polls opened at 8:00 am and will remain open until 8:00 pm, so don’t forget to get out and vote. Need to know where to vote or who else is on the ballot? Check out this post.

I’ll have the election results tonight as soon as they’re available, so be sure to check back later.

Thank you Susan for all your work during this debate. Hopefully you will get a lillte break after tonight. A job well done.

Thanks, Alan. There’s a very good chance I’ll celebrate the end of election season tonight with a much-needed glass of wine. I suspect I won’t be the only one.

Another message, open up your meetings. Let attendees speak. Respond to questions.

If we were allowed to bet, my money would be on “the BOE did not get the message” and I doubt any would bet against me.

What is the BOE ?

I think the message is – Why waste time filling in circles when there is no contest?