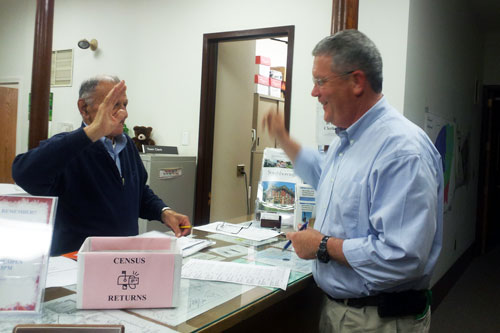 It will be another three years on the Board of Selectmen for Bill Boland, who won his reelection bid yesterday. Boland won what in recent days had become a contentious race against challenger Leo Bartolini. Boland got 942 votes (65%) versus Bartolini’s 509 (35%).

After Town Clerk Paul Berry announced the results at the Town House last night, Boland said he was thrilled to be reelected and congratulated Bartolini on a good campaign.

“I’d like to thank my supporters and everyone who worked hard for me,” Boland said. “I have my work cut out for me for another three years.”

In Southborough’s only other contested race, Andrew Mills will get to keep his seat on the Planning Board for another year after beating former Zoning Board of Appeals Chairman Sam Stivers by a count of 903 (66%) to 463 (34%). Mills was appointed to the Planning Board last June after member Mary Hynes retired. His elected term will expire next year.

All other races were uncontested and there were no surprises. You can see a full tally of the results posted on the town website. Note that the results are unofficial until certified, but Berry said last night he does not anticipate any significant changes.

At the end of the day, 1,461 Southborough residents – 21% of the voting population – turned out to cast a ballot. Historically speaking, that’s not a great turnout, but it at least beats last year’s dismal 12%.