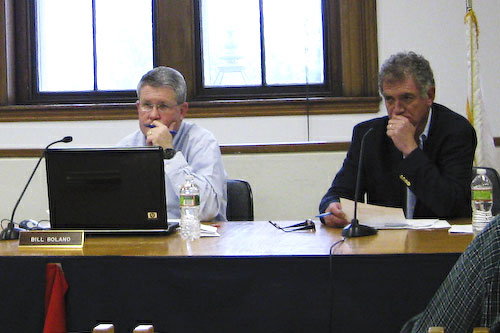 The Board of Selectmen has a new chairman. Historically, the board rotates the position with the selectman in the final year of his or her elected term getting control of the gavel. This year that honor falls to Selectman John Rooney, and last night his fellow board members unanimously elected him their new leader.

Before accepting his nomination to the position of chairman, Rooney laid out his expectations, calling the role more of a procedural title than one of elevated status. He acknowledged the “overwhelming” amount of work former Chairman Bill Boland put into the role, and said he would rely on his board members for support.

“In order for it not to feel overwhelming, the only way I know is that we all participate and share in the burdens,” Rooney said. “We all continue to do what we have been doing from the get-go.”

Selectman Dan Kolenda, who was appointed vice-chairman, said the coming year will be an important one for the board with the search for a new town administrator underway.

Kolenda thanked outgoing chairman Boland, who earlier this month won reelection to another 3-year term on the board, for his service to the town. “Your years of experience have proven very beneficial to the board and to the town,” Kolenda said. “I think you have served the town incredibly well.”

In his first act as chairman, Rooney proposed some new ways of encouraging more participation in board meetings on the part of residents. Stay tuned for more details on Rooney’s suggestions in an upcoming post.

All three Selectmen deserve a lot of credit and our thanks for their immense amount of hard work on our behalf.