Alexis is ranked sixth in New England for girls 12 and under, and 106th nationally according to TennisRecruiting.net, but her selection to the Longines tournament goes beyond just athletics. Reports Long Island Tennis Magazine:

Stefanie Graf, the winner of 22-time Grand Slam singles titles and Longines Ambassador of Elegance, assisted in the selection of all participants. Athletes competing in the U.S. tournament were selected on two criteria: athletic performance and commitment to give back to the community. Each registered athlete submitted a 300-word essay on philanthropy that was voted on by a panel of judges which included former world number one-ranked Graf.

Alexis also recently competed in the Girls 12 and under USTA National Clay Court Championship in Delray Beach, Florida. She was one of 128 girls selected for singles and doubles. After losing her first round singles match, Alexis went on to win her next three matches before being knocked out of the tournament.

She and doubles partner Jackie Nannery from Canton won their first three rounds before losing in the quarterfinals to two players from California who were ranked 56th and 58th in the nation, respectively.

Join me in congratulating Alexis on her accomplishments. 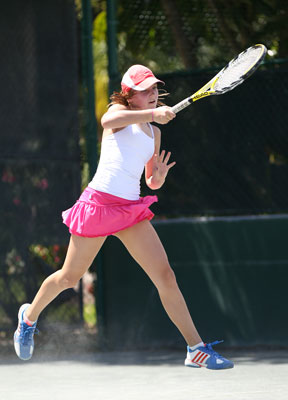 Above: Southborough’s Alexis Almy on the court (contributed photo)