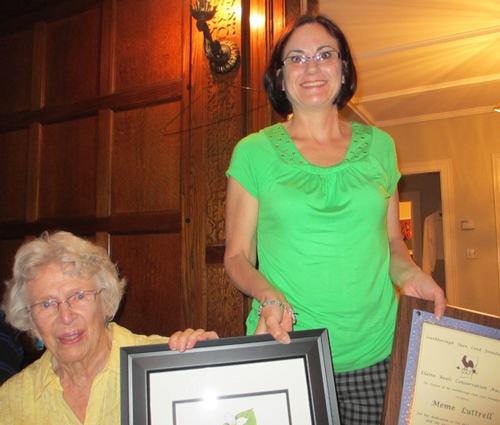 Every year the Southborough Open Land Foundation awards the Elaine Beals Conservation Award to a deserving Southborough resident. This year the honor went to Meme Luttrell, a long-time member of the Open Space Preservation Commission.

Meme Luttrell is the very deserving recipient of this years Elaine Beals Conservation Award. She has worked tirelessly to protect open space and the environment in Southborough.

Meme was a moving force behind Southborough Citizens for the Community Preservation Act and succeeded in getting it on the ballot and successfully passed by the voters.

She has been on the Open Space Preservation Commission for over 10 years, serving as chairman for much of the time. During her tenure, the Commission has fought hard to preserve as much open space as possible. She helped lead the town sponsored public outreach for purchasing the conservation restriction on Chestnut Hill Farm working alongside SOLF and SVT.

She helped lead in the re-write of an open space and recreation plan for the town as well as helping oversee the Wildlife Habitat Report that was drawn up by Mass Audubon.

Meme and her commission researched all open space set asides for subdivisions in the town and created a GIS mapping data layer on the town GIS system. It was this research that led to passage this year of the CPC funding of deed research on those parcels of land to try to ensure that the open space is being protected,

The Open Space Preservation Commission plays a huge role in attempting to assure that development adheres to the open space by law in town. Meme has played a leadership role in that endeavor.

The Elaine Beals Conservation Award is named for Southborough resident Elaine Beals, a Southborough Open Land Foundation member and former trustee. Mrs. Beals is also a longtime benefactor to Worcester County nonprofits. The award is given annually to a person or group who helps preserve and protect Southborough’s open lands and rural character. In addition to Mrs. Beals (2006), other recipients include Frederica Gillespie (2007), David Morgan (2008), Carol Gay (2009), Linda Hubley (2010), and Richard Upjohn (2011).

Congratulations to Meme for this well-deserved and long overdue recognition.

I have known Meme for the better part of 20 years, and her unwavering commitment to preservation of open space has been a constant. She has taught me how the conservation of open space provides natural and economic benefits to the residents of Southborough by providing habitats for wildlife, clean water, fresh air, absorbing rainfall, and areas for recreation. She has made me understand that preserving open space provides economic benefits for our town insofar as it contributes to smart growth, which saves money wasted on unplanned development. And, through her efforts, the preservation of parks and open space have attracted tax-paying businesses and residents to the area.

Thank you Meme for your dedication to the town and for taking the time to educate someone who grew up in a concrete city to really understand the importance of open space preservation.

I want to echo John Rooney’s congratulations to Meme Luttrell. In this case “well deserved” would be an understatement. From my vantage point on the Planning Board, I frequently observe first-hand Meme’s approach to open space issues and preservation in Town. She is extremely dedicated and unwavering, and yet always respectful (and perhaps never more so than when I have had occasion to cast a vote against her position on a project). Meme is as good as we have in Town to lead us on open space issues, and I am very grateful for her work and that of the others on the OSPC.