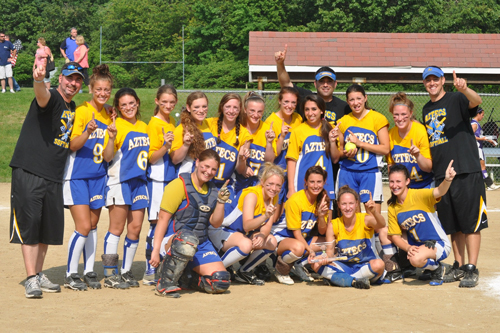 Above: The Assabet softball team after winning their first voke title in May (contributed photo)

I’ve talked a lot on the blog recently about the success Algonquin sports teams are having in the postseason, but turns out they’re not the only ones. I recently learned that the Assabet baseball and softball teams are chalking up wins of their own.

Yesterday the 4th-seed Assabet baseball team won its Central Division 2 quarterfinal match against 5th-seed Bay Path by a score of 5-2. They’ll face top-seed Northbridge in the semifinals tonight at 7:00 pm in Hudson.

Sophomore Tommy Walsh from Southborough is a starting pitcher on the Assabet team, and is credited with five of the team’s 12 regular season wins. Tommy was one of seven Assabet players nominated for the Colonial League All-Stars, and was one of only four ultimately selected.

After winning their first-ever State Vocational League Championship last month, the Assabet softball team is also making its way through their division playoffs. The top-ranked girls won their Central Division 3 quarterfinal match against 9th-seed Littleton by a score of 4-0 yesterday. They’ll take on 4th-seed Quaboag in the semifinals on Thursday at 3:00 pm at Hudson High School.