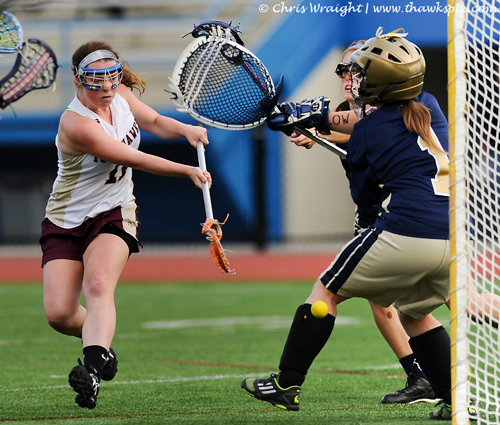 The Algonquin girls lacrosse team is gearing up for a rematch. For the second year in a row (and the third time in five years), the girls will face rival Westborough in the Central Division 1 finals on Saturday. But this year they’re hoping for a different outcome.

The top-seed girls made it to the finals after a decisive 17-5 win over 4th-seed Shrewsbury at Foley Stadium last night. It was a true team effort with ten different players scoring for the Tomahawks. Check out this video by the Worcester Telegram featuring Algonquin’s Carly O’Connell talking about the team’s performance.

Algonquin faced Westborough in the division finals last year, but lost 12-8 in a hard-fought match. Algonquin has beaten Westborough twice this season, including a dramatic, come-from-behind overtime victory to close out their regular season.

The girls lacrosse finals on Saturday starts at 1:30 pm at Foley Stadium in Worcester, and with the boys lacrosse team also reaching the finals, it’s going to be back-to-back championship games for Algonquin at the Foley field. The top-seed boys face 3rd-seed Grafton in the Central Division 2 finals at 3:30 pm.

In other postseason news, bad weather this week has postponed another batch of games. Yesterday’s Algonquin baseball semifinal match against Saint Peter Marian was moved to tonight at 7:00 pm at Tivnan Field in Worcester. Assabet baseball will face Northbridge in their division semifinals today at 3:30 pm in Hudson. And the Assabet girls softball semifinal originally scheduled for Thursday will be played today. The girls take on Quaboag at 3:00 pm at Hudson High School.

Best of luck to all the teams!

Congrats to both team to make it to the final, best of luck Saturday!