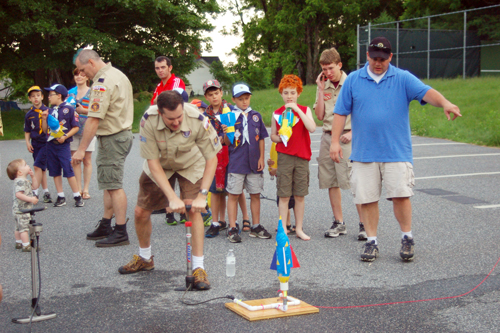 Above: Scouts shoot off homemade rockets in an end-of-year celebration (contributed photo)

Cub Scout Pack 921 held its end-of-year ice cream social on Sunday, and it might have caused some of you to think Southborough was being invaded. Reader Michelle explains:

Earlier this week, Southborough residents living near St. Mark’s church may have noticed some unusual activity in the sky. Numerous unidentified flying objects were sighted briefly hovering over the parking lot behind St. Mark’s church, and then falling to earth. Further investigation revealed that these objects were rockets that Cub Scouts from Pack 921 built out of empty plastic soda bottles and fueled with water and air pressure.

The boys filled the bottles part way with water and then adults used bicycle pumps hooked up to PVC pipes to pump air into the rockets. When a scout pulled a string, the rocket sailed high into the air. The rocket launch was the highlight of this year’s ice cream social, a year-end celebration of the pack’s achievements in which the scouts advanced to the next rank.

Cub Scouts is open to boys who are entering first grade through fifth grade. There will be an information session for boys who are interested in joining on Wednesday at Mary Finn School from 6:30 to 8:00 pm. 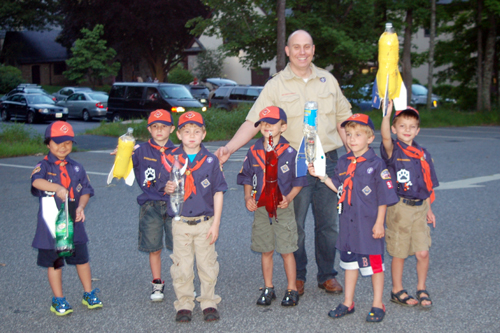 Above: Scouts from Pack 921 with their rockets (contributed photo)

It is great to see the Scout organization is alive and well! Hats off to the Scout leaders for helping to provide valuable direction in these young boys lives.