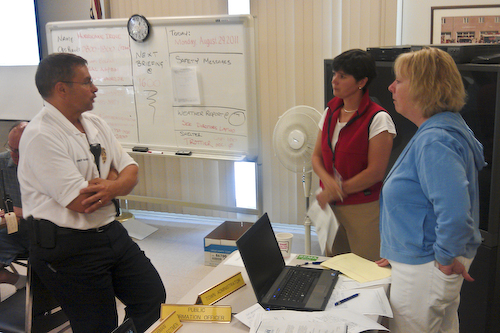 In 2009, Southborough became only the ninth municipality in Massachusetts to be certified as a StormReady Community. Earlier this month, the National Weather Service recertified Southborough, recognizing its prevention, preparedness, and response plans.

Read more in this press release from the Southborough Fire Department for more:

The Town of Southborough was notified this month by the National Weather Service (NWS), that it has successfully met all requirements and thus been awarded renewal/recertification of its StormReady Community status until July 1, 2015.

Southborough was awarded national recognition as a StormReady Community by the NWS on July 1, 2009, the 9th Massachusetts Community at the time. The development of an extensive prevention, preparedness and response plan specifically related to weather threats and events was a huge undertaking and required the joint efforts and collaboration of numerous town departments, committees and organizations.

“(It) sounds like Southborough continues to be a very proactive community”, stated Glenn Field, Warning Coordination Meteorologist for the National Weather Service in Taunton, MA, in the notification e-mail sent to Southborough.

The StormReady program is designed to enhance a community’s awareness, preparedness, response, recovery, emergency public notification and public education related to hazardous weather events. In the process it also enhances the community’s overall emergency management plan, increasing the safety of citizens at all levels and phases of significant emergencies and disasters.

While the Town has developed an extensive StormReady preparedness and public notification plan, the best method to ensure the safety of you and your family is to become educated and prepared personally. Weather hazards, factual information and preparedness steps can be located all over the internet (including: www.Ready.gov, www.Mass.gov/MEMA, www.cdc.gov, & www.nws.noaa.gov). We encourage everyone to take some time to become educated and prepared.