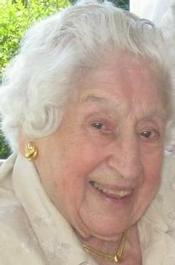 Throughout her eight decades living in Southborough, Eleonora Burke was a trailblazer. She served as the town’s first female counsel and town clerk, and served on a number of town boards. In addition to the obituary below, be sure to check out this lovely story in the Metrowest Daily News.

Born in Framingham, she was a daughter of the late Charles and Mary (Mitchell) Fantony. Mrs. Burke was a graduate of the Portia Law School in Boston, an all-woman law school. She was a member of the Massachusetts Bar and the Worcester County Bar Association. Having her own law office from 1936 to 1986, Eleonora decided 1986 was the time to retire.

Eleonora served as a member of the leadership of Southern Rhode Island Volunteers during its Seniors Helping Others years on its board of directors for three years. She was active in the town of Southborough, where she resided. She served as counsel for the Board of Selectmen and town for nine years, was elected Town Clerk serving for 10 years, was on the Council of Aging for 20 years, was on the Board of Trustees of the Marlborough Savings Bank for 19 years, served on the Town Committee to build an addition to the Library, served on a committee to build a new middle school, and was active in various other civic areas.

Eleonora had been a summer resident at Green Hill Beach since 1949, changing that status to permanent resident since 1999. A tireless advocate for others, SRI Volunteers is proud to name Eleonora its first Honorary Director. Mrs. Burke was very involved with helping school districts become accessible for students with special needs.

She is survived by two children, Donna McManus and Kevin Burke, both of Charlestown, R.I.; nine grandchildren; and 19 great-grandchildren; and a sister, Charlotte Milani of Pennsylvania. She was the sister of the late Marie Mello, Charles and Joseph Fantony.

A Mass of Christian burial will be celebrated Tuesday, June 26, at 11 a.m., at St. James Chapel, 2079 Matunuck Schoolhouse Road, Charlestown, R.I. Burial will take place at a later date in Southborough. Visiting hours are Monday, June 25, from 4 to 7 p.m., at the Avery-Storti Funeral Home, 88 Columbia St., Wakefield.

Definitely a trailblazer. Rest in peace.